Enemy At The Gates Blu-ray Review 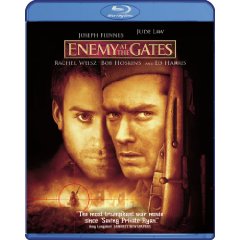 Like Saving Private Ryan, Enemy at the Gates opens with a pivotal event of World War II–the German invasion of Stalingrad–re-created in epic scale, as ill-trained Russian soldiers face German attack or punitive execution if they flee from the enemy’s advance. Director Jean-Jacques Annaud captures this madness with urgent authenticity, creating a massive context for a more intimate battle waged amid the city’s ruins. Embellished from its basis in fact, the story shifts to an intense cat-and-mouse game between a Russian shepherd raised to iconic fame and a German marksman whose skill is unmatched in its lethal precision. Vassily Zaitzev (Jude Law) has been sniping Nazis one bullet at a time, while the German Major Konig (Ed Harris) has been assigned to kill Vassily and spare Hitler from further embarrassment.

There’s love in war as Vassily connects with a woman soldier (Rachel Weisz), but she is also loved by Danilov (Joseph Fiennes), the Soviet officer who promotes his friend Vassily as Russia’s much-needed hero. This romantic rivalry lends marginal interest to the central plot, but it’s not enough to make this a classic war film. Instead it’s a taut, well-made suspense thriller isolated within an epic battle, and although Annaud and cowriter Alain Godard (drawing from William Craig’s book and David L. Robbins’s novel The War of the Rats) fail to connect the parallel plots with any lasting impact, the production is never less than impressive. Highly conventional but handled with intelligence and superior craftsmanship, this is warfare as strategic entertainment, without compromising warfare as a manmade hell on Earth.

‘Enemy at the Gates’ is a good film. The combat scenes are all excellently choreographed and edited, from the massive opening battle sequences, to all of the tense sniper vs. sniper showdowns in the bombed out ruins of Stalingrad. The opening batttle sequence is shocking in its brutal depiction of World War II’s eastern front.

The film shows a new perspective on WW2. There are no Americans in this film, so you can get a feel of how the struggle against Nazi Germany extended much farther than U.S. casualties. In fact, the Soviet Union lost close to 50 times more people in the war than the United States did. That’s right, 50 times. Over one million soldiers lost their lives in the Battle of Stalingrad, which the movie is set in. That’s why I think this movie is informative in showing a new perspective. It is also goes beyond the typical communist=evil rhetoric that has been so common in U.S. movie making.

Some have complained about the accents, among other things, of the characters being detrimental to the realism. You have to realize that this is a film. Further, this is not a documentary, it’s historical fiction.
Movie Content: 8/10

The print is presented in 1080p/AVC MPEG-4 with a 2.35:1 aspect ratio. Colors are rather dull throughout the entire presentation. This is very disappointing that colors did not receive top billing with this transfer. Blacks are rather solid. Fleshtones look very natural. I found the details to be lacking a bit due to the dull color pallette. This was a disappointing release on Blu-ray.
Print Quality: 7/10

The audio is presented in Dolby TrueHD 5.1 mix. I was disappointed by the audio mix too as this was underwhelming considering the type of film that this is involving action. All of the gun fire fills the soundfield rather nicely, but it lacks that extra sounds that these are ear piercing bullets flying around. I just never felt like I was immersed by this soundtrack which is a shame. Dialogue is clean and clear through the center channel.
Audio Quality: 7/10

All special features are presented in standard definition except for the Theatrical trailer being offered in HD.
Special Features: 7/10

‘Enemy At The Gates’ wasn’t a bad film at all, but did not make a truly lasting impression on me like other classic war movies, such as Saving Private Ryan, Full Metal Jacket, and Apocalypse Now. I am disappointed by the audio and video on Blu-ray which makes me want to only recommend the Blu-ray to hardcore fans of the film.
Overall Rating: 7/10