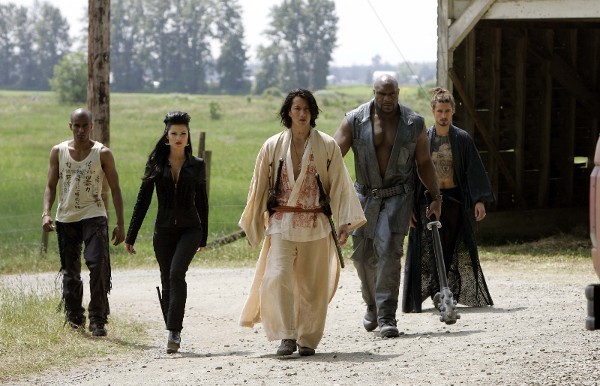 While 2003’s Daredevil was a conventional superhero movie, the 2005 spinoff, Elektra, is more of a wuxia-styled martial arts/fantasy flick. Elektra (Jennifer Garner) has returned to her life as a hired assassin, but she balks at an assignment to kill a single father (Goran Visnjic, ER) and his teenage daughter (Kirsten Prout). That makes her the target of the Hand, an organization of murderous ninjas, scheming corporate types, and a band of stylish supervillains seeking to eliminate Elektra and tip the balance of power in the ongoing battle of good vs. evil.

“Elektra” is one of the weakest entries into Marvel’s recent string of films based on their comics. Although it is a step above “Hulk” and miles above Dolph Lundgren’s version of “Punisher,” this film isn’t quite as good as the film that it was born from, “Daredevil.” Granted, “Daredevil” wasn’t a real gem compared to its peers, but the character did have a lot more development than found in this film.

“Elektra” starts off fine enough, with a high body count that is sure to get any action fan a little giddy. However, after this initial look at Jennifer Garner’s title character at work, we are dumped into a long, drawn out and quite dull series of flashbacks and a sad attempt at the development of a plot. When the action is on, this film is at its best, although some of the kung-foolery gets a little silly at times (especially the fight involving way too many bedsheets). There are plenty of villains, but no one ultimate baddie. Collectively, the villains are known as the Hand. I’d love to have seen Elektra go at it with Cary Hiroyuki-Tagawa’s character, who really seems to be a bad guy in the wings. Instead, Garner tackles a motley crew of a tattooed warrior, a chick with really strong breath, and a murdering ninja with lightning-fast moves, as well as a number of other, lesser villains.

In the end, the viewer is left wondering just exactly what happened. Why was Elektra so quick to protect the young girl and her father? She had no clue why the Hand were after them initially. Why couldn’t she finish off some of the Hand while they were tracking their target? She finished many of them off quite quickly when she put her mind to it. There are a few other questions I could mention, but they may reveal too much.

This film tries too hard to be both an intellectual film with all of the flashbacks and an action flick. What you end up with is a fluffy action flick with almost no plot development and zero character development. In fact, this film had an advantage over other first films for comic characters: no need to develop the main character. That was done in “Daredevil,” which I have to give credit for building up two superheroes in one film. That’s the one thing that all comic flicks have to fight with initially. “Elektra” didn’t even use that to its advantage. Instead, it played out as if it was looking for a plot, or at least a good reason, for our heroine to do what she did during the film.
Movie Content: 6/10

The print is presented in 1080p/MPEG-4 with a 1.85:1 aspect ratio. Like ‘Daredevil’ I have seen this film in the theater and DVD quite a bit since it released. While the presentation on Blu-ray is the best yet, this is a rather dark film in many scenes that a bit more lighting could have done wonders. I found the picture quality to be pristine and a very clean transfer. ‘Elektra’ offers a colorful color palette with reds being the most dominant. Elektra’s red outfit does stand out very well. This is also a very detailed transfer and I think those vibrant colors help bring out the details even more.
Video Quality: 8.5/10

The audio is presented in DTS-HD MA lossless 5.1 mix. I found this mix to be immersive when there is action on screen and there are many times throughout the film where there are plenty of fight scenes. I felt as if I were in the center of the action. The score was also well implemented into the mix to add to the atmosphere of the film. Dialogue is clean through the center channel.
Audio Quality: 9/10

I only recommend this flick as a purchase to hardcore “Elektra” fans. You may want to buy it if you, like me, are a completionist and just have to have every Marvel film on DVD or Blu-ray. Otherwise I’d rent this film before laying any cash money down for it. It’s okay, but there are plenty of better comic flicks out there to purchase. All the special features are in standard definition and are ported over from the 2 disc DVD release.
Overall Rating: 8/10