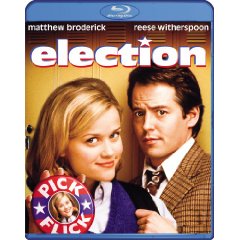 ‘Election’ is a comedy that is not for everyone due to its dark nature. Alexander Payne directed this film, and his skills are masterful. His technqiues and shots on screen are really well done and are appreciated more because one would think that there is not much to do when a good majority of the scenes take place in a high school. I really like how he sets the film up and takes you through it. It never gets dull, and the satire keeps going on and on. The script, which he co-wrote with Jim Taylor (based on Tom Perrota’s novel), is really sharp and well planned out. The film was moderately a success at the box office with a U.S. total gross of $14 million dollars based off of a $8 million dollar budget.

Jim McAllister (Matthew Broderick) who is a history teacher drives a compact equipped with one of those automatic seatbelts. In a sly running gag, whenever McAllister (“Mr. M”) gets into his car, a character that makes him squeamish approaches the vehicle. As awkward conversation winds down, McAllister starts his engine and the seatbelt powers up, slowly, humorously tightening its grip on the harried instructor like an electric noose. High school politics and domesticity have Jim in a stranglehold; he may be in the driver’s seat, but he is far from in control.

Election is essentially about the battle of wills between McAllister and one of his students, Tracy Flick (Reese Witherspoon). Tracy is an overachiever who’s running unopposed for president of Nebraska Carver High. The problem is that McAllister co-ordinates the student government so it adds yet an extra conflict between the two. Jim ends up persuading Paul Metzler (Klein) to run against the unopposed Tracy. Paul is a very soft spoken person, so it just doesn’t look like he is the type to be up there running against someone of Tracy’s personality. Then the troubles begin for Jim as he has gone to battle with one of his students.

I enjoyed the performances in this film a lot. I think that this is Matthew Broderick’s best role in years. Broderick as McAllister is also a perfect role for him. Reece Witherspoon also received a Golden Globe award for her performance. All the actors have great chemistry and play off well against one another.
Movie Content: 4.5/5

The print is presented in 1080p/AVC MPEG-4 with a 2.35:1 aspect ratio. Paramount has been doing a great job with their catalog releases on Blu-ray over the last few months. Considering that this film is 10 years old, the film offers an above average rating against other catalog titles. By no means is this bad. Colors are strong and bright throughout the print offering a decent pop to the image. Black levels are deep. Details were good in several scenes on up close shots, but when the camera panned away there was a loss of detail. There is grain in the film which is not consistent throughout the print. This can get a bit distracting at times. The same problem that was apparent with the December Paramount releases is also an issue with the film, there are white specs of dirt on the print throughout.
Video Quality: 4/5

The audio is presented in Dolby True HD 5.1 mix. ‘Election’ is a dialogue driven film, so this is a front heavy experience. The dialogue was clear and crisp with no apparent issues. The mix is well balanced with the low usage of the surrounds. The rears do get some use with the soundtrack, but do not offer the excellent depth. I would say that this mix was sufficient enough for this type of film.
Audio Quality: 4/5 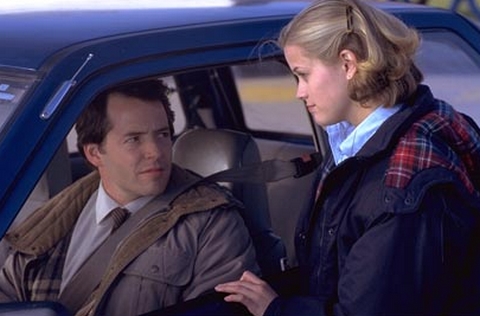 We are only offered one extra, and that is an audio commentary with the director of the film. I do hope that studios begin to add more than just 1 or 2 extras as it does hurt sales for those that want to upgrade their DVD version.
Special Features: 2/5

‘Election’ is a good comedy that will keep you entertained the entire time. There is more to the story than just an election or Jim’s rivalry with Tracy. We learn that life isn’t as easy as it sometimes can appear. Both Mathew Broderick and Reece Whitherspoon do a great job with their performances to bring this screenplay to life. If you are a previous owner of the DVD, I recommend the upgrade with better video and audio.
Overall Rating: 4/5 (Purchase)