Posted in DVD Reviews by George Theofanopoulos on 30 January 2010 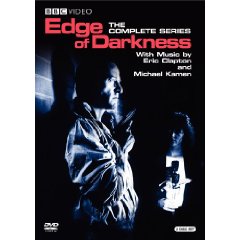 Groundbreaking environmental-espionage shocker Edge of Darkness (1985) begins routinely enough but then ratchets the suspense to levels that would have turned Hitchcock himself green with envy. Emma Craven (Joanne Whalley in her first staring role) is a young environmental activist killed in mysterious circumstances. Emma’s father Ron Craven (Bob Peck in a star-making performance) will not be silenced and, as a police detective, is uniquely positioned to pursue his own unofficial investigation. He moves from grief to a determination to find the truth, all the while advised and/or comforted by Emma, but is she a ghost or a manifestation of his haunted psyche? Craven digs deeper, uncovering labyrinthine conspiracy in the nuclear industry and, as the body count rises, encounters the garrulous CIA agent Darius Jedburgh (a superb Joe Don Baker) with a mysterious agenda of his own. Accompanied by a haunting musical score by Michael Kamen and Eric Clapton, Edge of Darkness builds on the legacy of Tinker Tailor, Soldier, SpySmiley’s People to become quite simply the best television thriller ever.

Craigmills, Yorkshire, 1985: Ronald Craven (Bob Peck) is a detective with the West Yorkshire constabulary tasked with investigating allegations of corruption and ballot rigging within the infrastructure of the local miner’s union. A widower who lives with his student activist daughter, Emma (Joanne Whalley), Craven finds himself confronted with the unthinkable when a shotgun-wielding assailant confronts him on the front lawn of his remote home and Emma is apparently ‘accidentally’ killed in the resultant carnage. A police manhunt is launched and as the grief-stricken Craven begins to make inquiries of his own, he inadvertently finds himself involved in a conspiracy that stretches from the corridors of Westminster to the stygian depths of ‘Northmoor’, a remote Nuclear waste storage facility on the Yorkshire dales, and which will take him far beyond the edge of darkness and into the hinterland where big business, corrupt government and state sanctioned execution walk hand in veiled hand.

Originally broadcast in the winter of 1985 at the height of the special relationship between Reagan and Thatcher, the Labour party’s most militant incarnation, renewed violence in Northern Ireland, and at a time when the British public’s dissatisfaction with the Conservative government’s ruthless economic policies and relentless courting of multinational business interests had resulted in wide-spread suspicion and cynicism of the establishment, the series was a smash-hit ratings winner which was repeated almost immediately, swept the BAFTA awards (British Emmys) and made a house-hold name out of the late, lamented Bob Peck.

Veteran screenwriter Troy Kennedy Martin’s script, for my money, remains the most complex, nuanced, eloquent and haunting examination of a decent man caught up in the serpentine machinations of corporate power and closed government ever written. To label this series as merely a thriller alone is both erroneous and incorrect. It transcends the genre, incorporating elements of the political thriller, ghost story, vendetta movie, spy drama, western, film noir and magic realist literature, mythological fable, ecological treatise (James Lovelock’s “Gaia Hypothesis” as set forth in his book, Gaia: A New Look at Life on Earth, was clearly an influence), and all points in-between.

Performances are, frankly, stunning. Bob Peck’s turn as the stoic, slowly unraveling Ronald Craven is, to this day, one the finest pieces of screen acting that I have ever seen. You will never see a finer or more subtle depiction of a man who has been eviscerated by grief. His uncomprehending, hollow, dead-eyed stare will haunt you forever and the primal scream of sorrow and frustration which he gives rise to during his second confrontation with the man who killed his daughter is still one of the most chilling moments in television history. Matching Peck pound for pound is Texan actor Joe Don Baker, whose turn as the jovial, ambiguous CIA agent, Darius Jedburgh, provides some of the most memorable moments in the series: the revisionist “show-down and soliloquy” which occurs when Jedburgh confronts one of the series’ principal antagonists at a conference in Gleneagles, Scotland, towards the close of the story, is still discussed in reverent tones in British drama and screen-writing circles to this day. Both actors are ably supported by a brilliant cast which features a smorgasbord of British acting talent including Ian McNeice, Zoe Wanamaker, Charles Kay, John Woodvine and Jack Watson.
Movie Quality: 9/10

Overall if you find yourself haunted by Eric Clapton and Michael Kamen’s haunting theme tune, “Obituary”, you can find a superbly chilling live rendition of it on the live Clapton album, 24 Nights. It’s a superb cast, with great writing, classic direction, a fine score.
Overall Rating: 8/10