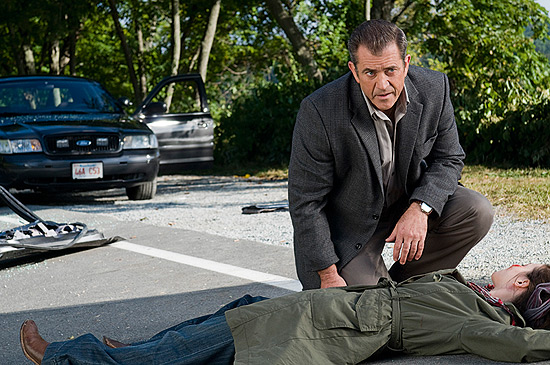 The good news is that Edge of Darkness (no relation to the fine 1943 war picture of that name) brings back Mel Gibson in front of the camera for the first time in nearly a decade. Although he’s grown creased and leathery and his thatch has thinned, the movie star who was Mad Max still has the charisma and gravitas to center a dodgy suspense tale and propel it to the finish line. Gibson plays veteran Boston police detective Tom Craven, who welcomes home daughter Emma (Bojana Novakovic) for a rare visit, then sees her shot down at his front door. Because the gunman shouted “Craven!” and because a cop makes enemies, Tom assumes Emma took a bullet meant for him, which adds considerably to his grief and pain. But as he looks into the life of a daughter he loved yet scarcely knew, he discovers she’d been preparing to turn whistleblower on her employer, a corporation doing unsavory clandestine things for the government. 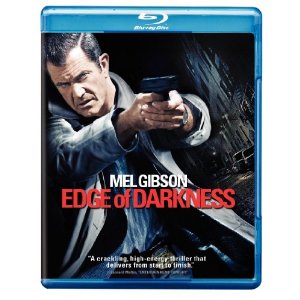 “Edge of Darkness” is a Boston passion play in which Mel Gibson devours a whole grief pizza loaded with paternal rage and extra cheese, interrogates a bunch of nerve-jangled Chowdahs and finally blows some snarling corporate villains away with his big, loud gun. Like most Gibson films – even the ones he doesn’t direct – it’s so melodramatic and emotionally lurid that you’re either captured by the mood or you sit outside of it, startled by the absurdity.

Mix “Taken” with the cynicism and dark wit of “The Departed” and you have this film; Baby Boomers may like it because all of the twentysomethings in the movie are idiots and pawns – which is roughly where Boomers like twentysomethings to remain – while it champions blarney like righteous vengeance and booze in the afternoon. I appreciated it for the big-eared Senator in a track suit.

Mousy scientist Emma Craven (Bojana Novakovic, a cute Serb with bangs) harbors some secret about the shadowy weapons company she interns at; before she can tell her Boston cop dad Thomas (Gibson) about it, a masked gunman pumps a couple barrels into her chest on Tom’s doorstep. Cue Gibson staring into space as a sign of rage, and “hey, it’s that guy!” Jay O. Sanders showing up as Tom’s chummy chief.

Ray Winstone co-stars as a world-weary Somebody Hired By Someone named Jedburgh to follow Craven around while he knocks on the doors of Emma’s freaked-out boyfriend and best friend, who employ 20-cent accents and conduct themselves as if they’d just sucked hard on a meth pipe.

Jedburgh smokes cigars and sips champagne lunches on park benches, aristocratic villains (Danny Huston and Damian Young) smell of malfeasance and faint homosexuality, and Gibson stalks around in his moralistic, legalistic manner, invoking, at one point, the crucifixion of Jesus. The meaning of life is frequently discussed throughout the film.
Movie Content: 8.5/10

The print is presented in 1080p/VC-1 with a 2.40:1 aspect ratio. This is one of those films that will make you happy owning on Blu-ray. From the colors to the details, your jaw will drop if you look for some of the superb details. Colors are vibrant providing an excellent looking picture. Flesh tones are natural and accurate looking. Blacks look inky. Details are where this film shines the most with the camera even panning away in many scenes. Not once did I feel like I was at a loss for details making this a very strong presentation.
Video Quality: 9.5/10

This is a very atmospheric and immersive sounding film. The rears provide quite a few times where sound effects panned across the speakers. There are many scenes that are outside which also take advantage of the soundfield providing some dynamic sound. Dialogue is clean through the center sounding ever so crisp.
Audio Quality: 9.5/10

“Edge of Darkness” was a film that I enjoyed from start to finish, albeit a few scenes that dragged the film down a little bit. I would recommend this film if you enjoyed others like “Taken” even though both are a bit different but similar premise.
Overall Rating: 8/10