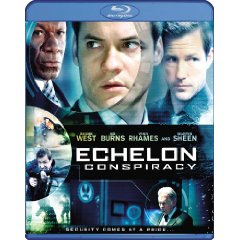 When Max Peterson (Shane West) receives a series of mysterious cell phone messages that promise him untold wealth, he soon finds himself the victim of a deadly international plot. Chased by a lethal team of government operatives, Max races across the planet in a desperate attempt to unravel a conspiracy that threatens the stability of the entire world. Edward Burns, Ving Rhames and Martin Sheen co-star in this techno-charged edge-of-your-seat action thriller!

Going in with very low expectations for this film, I came out all disappointed. From the script to the subpar acting, it hurt this film a lot. It didn’t help at all that this felt a lot like been there, done that with another film so simialar in nature called ‘Eagle Eye’. The story centers around powerful government organization using a cell phone to control an unwitting young man as they are shrouded in secrecy. This is where I get the comparisons to ‘Eagle Eye’.

Speaking of some baffling casting choices is Jonathan Pryce as Mueller, the wealthy owner of the hotel/casino in Prague. He periodically appears to engage in cryptic, mildly threatening conversations with Reed, who he feels isn’t doing a good enough job taking care of the Echelon problem. Why this character was deemed necessary, I have no idea. Other than an interesting metaphor about arrows and phoenix feathers, he contributes absolutely nothing to the story. I got the impression that Pryce was just as surprised by being cast; as is the case with Sheen, his performance has the air of someone not taking his role seriously. This might have worked had the film gone in a much campier direction.

Not once did I ever feel that I could sit back and fully enjoy this film. The problem here is that the film just does not gel together. Then add dialog that just does not work well here and it makes you wonder how these studios at times spend millions of dollars on ideas that probably will never work.
Movie Quality: 4/10

The print is presented in 1080p/AVC MPEG-4 with a 1.85:1 aspect ratio. This probably one of the more beautiful looking films that I have seen on Blu-ray albeit the horrible movie content. The image is pristine with fantastic looking details. Take a look at the cuts on Mitra’s arms; you can see the details making them look very realistic. ‘Echleon Conspiracy’ sound is presented with a Dolby TrueHD 5.1 mix. ‘Echleon Conspiracy’ also a great sounding film that I have heard to date on the high definition format. This is an action heavy film and boy does the action sequences not miss a beat. Even the dialog is mixed well for that perfect balance.
Video/Audio Quality: 9/10

There are no special features at all, zilch, nada, nothing at all.
Special Features: 0/10

I was not impressed and did not enjoy ‘Echelon Conspiracy’ as this felt like a poor man’s ‘Eagle Eye’. These days, Hollywood is not being as creative as they once were and it shows with this film. The print and audio is fantastic which is surprising for a film like this. The real kicker here is that there are no special features at all which is a shame.
Overall Rating: 6/10