Sprinkle a little bit of War Games over here, a tad bit of Bourne over there, and some Enemy of the State in the middle and you get ‘Eagle Eye’. This film borrows a lot from many other films that came before it, but it hits a brick wall in a few places from being a great film. ‘Eagle Eye’ is good, but the problem here is that the film tries to be true to life and also be unrealistic at the same time. This makes the viewer not take the film seriously, and that is a darn shame. The film did great at the theaters worldwide with a total gross of $174 million dollars.

Hollywood can at times wrap its little fingers around a good concept and blow it up in many different directions causing the film to end up being just a good film. Jerry Shaw (Shia LeBeouf) is an employee at Copy Cabana who ends up getting himself into a world of trouble once his twin brother Ethan (Shia LeBeouf) passes away. The death of his brother becomes a mystery and Jerry gets pulled into this wild rollercoaster ride. Once he arrives to his apartment, he finds all kinds of military weapons sitting on tables, the floor, within the apartment.

While Jerry is looking at all this weaponry in his apartment and is dumbfounded how it got there, his cell phone beings to ring. On the other end is a lady that alerts him that the FBI is on the way. He jumps out of a window and runs for his life as the phone goes off again telling him to look for a specific car that he must get into. Once he gets into the car, he has a small scuffle with Rachel Holloman (Michelle Monaghan) whom is also receiving these mysterious phone calls. This is a film where I must stop there with the story to not spoil a thing. There are twists and turns throughout the entire film.

One aspect of the film that I really like had to do with the thought that technology can be the death of us in the future. It is so very true that one day, technology could cause chaos in the world. This all happens because of our government and how they continue to stick their noses in areas that would be a part of our private lives. In a sense it gives a look into a possible invasion of privacy coming in the future.

‘Eagle Eye’ excels in the acting department with Michelle Monaghan and Shia LeBeouf as our leads. Then throw in Billy Bob Thornton, Michael Chiklis, Rosario Dawson, and Ethan Embry as the supporting cast and you have a star studded crew. Both Monoaghan and LeBeouf actually had some nice chemistry with each other here. While the film has some great acting, there are elements throughout the film that just go beyond reality. These elements end up hurting what could have been a good film. Again, due to spoilers I won’t mention them and these are for you to watch.
Movie Content: 4/5

The print is presented in 1080p/AVC MPEG-4 with a 2.40:1 aspect ratio. Colors are vivid and rich throughout the entire presentation. Fleshtones are natural without any digital work. Blacks also have an inky look to them. Details are exceptional showcasing what a great print that Paramount has put together. There is some grain throughout the film, which isn’t distracting at all.
Video Quality: 4/5

The audio is presented in Dolby TrueHD 5.1 mix. This is a very immersive soundtrack during the action sequences. This is a film where there are a lot of action and chase sequences. Those looking for an audio mix that will take advantage of your equipment, this is the film for you. This is a very well done audio presentation that has dynamic range with the sound effects and a lot of panning from speaker to speaker. Dialogue is clean and crisp through the center channel, but there is a small issue that the volume of the dialogue is a bit on the lower side. I had to raise the volume a few times during the dialogue scenes. Other wise this is a demo experience with the audio.
Audio Quality: 4.5/5 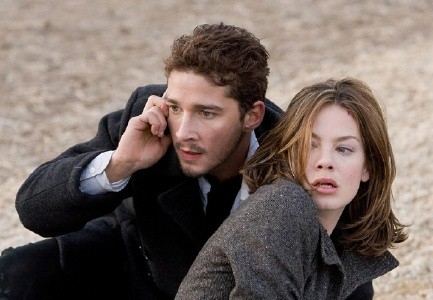 All special features are available in high definition.
Special Features: 4/5

‘Eagle Eye’ is a good film, but there are a few issues with the film’s premise that holds it back from being great. I enjoyed the film for what it is, but there were times where I felt that it dragged a bit. On Blu-ray, the film has video and audio that is almost demo worthy. The 2 disc DVD edition also looks and sounds good for those limited to viewing the film on the DVD format. I recommend this film as a rental, but people that love films of this genre may consider this a purchase even though the replay value is not there.
Overall Rating: 4/5 (Rental/Purchase)