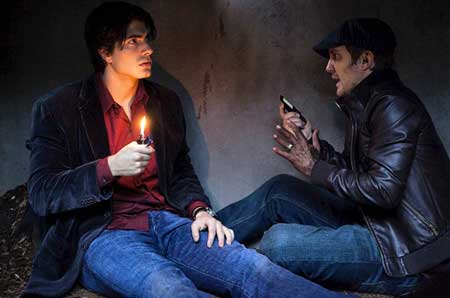 Like a James Bond of the occult–only not as suave or debonair–Dylan Dog manages to get himself in and out of trouble with finesse, while bedding a different lady with each adventure he embarks on. A self-styled “nightmare investigator,” he takes on cases that normal PIs won’t. Along with his assistant, Felix, a quip-spouting Groucho Marx lookalike, he tracks down some extremely dark persons (and nonpersons) for a somewhat modest fee. 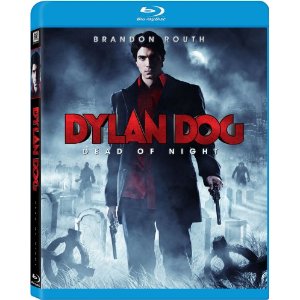 Dylan Dog was created by writer Tiziano Sclavi in 1986. Originally published in Italy, the long-running series is set in London, where Dylan works as a supernatural investigator who (against type in a series like this) has a good working relationship with the police. Dylan is a former Scotland Yard investigator, and perhaps the reincarnation of the original Dylan Dog, who died in 1686.

Dylan Dog’s mysteries have been published off and on over the past two decades, with Sclavi backing off and allowing others to interpret the character. The good-looking investigator has become a true star in Italy’s comics publishing, as well as around the world.

A young girl ( Anita Briem, Journey to the Center of the Earth 3D babe)is preparing supper for her and her dad. She is dancing in the kitchen, starting out with some good rock jams. She gets a clean plate out and sets it on the counter and then suddenly there is blood on the plate. It is dripping from the ceiling. She runs upstairs and her dad is dead. A werewolf jumps out the window…enter Dylan I. Dog (Brandon Routh), private investigator. He used to investigate weird undead things, a younger, hipper version of Kolchak, the Night Stalker. Dylan is old school. He uses snail mail. Deals with cash and checks, drives a VW Beetle (that backfires) and uses a film camera.

There seemed to be something missing with the love interest in the movie…one minute they don’t know each other the next its like she’s giving him pity sex, because of his situation. I didn’t get any chemistry between them. But when things heat up, his narration has a great one-liner.

The print is presented in 1080p/AVC MPEG-4 with a 2:40:1 aspect ratio. This is a very stylized film with blue tints and various dark colors that make the film pop. The color palette is very strong throughout. The reason is due to the film’s nature, certain colors such as reds stand out the most. Black levels are deep with an ink like look. Details are excellent providing various sense of depth. Scenes up close and when the camera pans away show provide stunning details.
Print Quality: 9.5/10

The audio is presented in a DTS-HD MA l0ssless 5.1 mix. This is one film that takes complete advantage of the lossless sound mix. FOX engineers take yet another action film providing top notch audio. This is a demo worthy mix that could easily sell those on the fence about the format. The soundfield is immersive at all times no matter if it is the special effects or dialogue. I was literally amazed with the amount of panning effects from each speaker in the rears. Bass was punchy as it shows with the amount of gunfire and explosions. Dialogue is also well placed in the center channel sounding crisp and clear.
Print Quality: 9/10

This won’t create the cult following that Army of Darkness has, but it is a decent horror comedy that helps fill a void in the genre. Fans of the comic books will enjoy the film and worth picking up for fans.
Overall Rating: 6/10