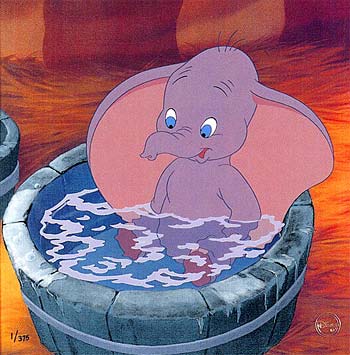 For the first time ever, in celebration of this landmark film’s 70th anniversary, experience the daring adventures of the world’s only flying elephant with a dazzling all-new digital restoration and brilliant Disney enhanced high definition theatre mix sound. The inspirational tale of Dumbo, the courageous baby elephant who uses his sensational ears to soar to fame with the help of his clever best friend Timothy Q. Mouse, will thrill and delight audiences of all ages. And now, the award-winning music and empowering messages about friendship and belief in yourself reach new heights in this must-have Blu-ray high-definition presentation of Walt Disney s animated classic Dumbo! 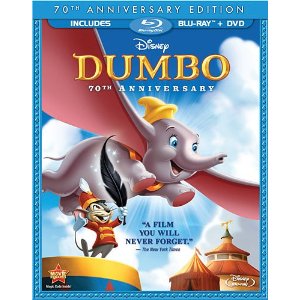 Dumbo is the story of a baby elephant born with enormous ears. When the other circus elephants reject him, and his mother is locked away as a “mad elephant” for trying to protect her baby, Dumbo’s only friend turns out to be Timothy, the circus mouse. Together, they learn that huge ears can be an asset.

This movie has much to recommend it. It’s only an hour long, which means it won’t bore kids beyond their attention span. Its message of treating those with differences or handicaps fairly and kindly is important for everyone to hear.

Best of all, it has some wonderful musical numbers. “Baby Mine” still brings tears to my eyes all these years later, and “When I See an Elephant Fly” is hysterically funny to those old enough to understand the word play. But “Pink Elephants” has got to be one of the most inventive and clever numbers ever devised. The constantly morphing elephants of this sequence were all hand-drawn — no computers used at all!

Caution: This movie was made in the 1950’s, and there is some ethnic stereotyping that can be offensive. For instance, the ringmaster, who has a thick Italian accent, is somewhat of a buffoon. Also, the musical number “When I See an Elephant Fly” is sung by crows that are clearly meant to be African Americans. They use some poor grammar and in other ways conform to common stereotypes of the times. However, I believe that little children won’t understand the stereotype, or it can be dealt with by explaining that the crows don’t go to school, so they don’t talk correctly.
Movie Quality: 8/10

The print is presented in 1080p/AVC MPEG-4 with a 1.33:1 aspect ratio. Featuring a terrific restoration, “Dumbo” has never looked better on Blu-ray. Like many films of the era “Dumbo” was shot on nitrate stock which disintegrates fairly rapidly over time so the miracle here is that it looks as good as it does (due to careful care) and the magic of digital technology. The images sparkle with a crystal clear image almost too perfect. The rich color, deep dark blacks and detail in the images are truly astonishing.
Print Quality: 9.5/10

The audio is presented in a DTS-HD MA l0ssless 5.1 mix. The sound is rather impressive in ‘Dumbo’ and this I wasn’t even expecting going in. It takes advantage of the soundfield with the rears actually getting some sound effects and the soundtrack peers into the soundfield. Dialogue is well placed through the center channel with voices being so ever clear.
Print Quality: 9/10

Dumbo (70th Anniversary Edition) is one Disney’s true classic animated movies. The story is about a small elephant who is born with big ears and then shunned by the rest of the circus for being different. The film looks and sounds great on Blu-ray for an animated film that is 70 years old.
Overall Rating: 7/10