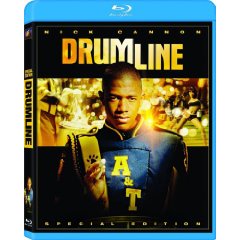 A lot of us our musicians at heart tapping a drumbeat on any surface acting as if we are drummers. I have had my fair share fun messing around on a real drum kit. How about those that actually play the drums on a daily basis as a part of their lives? I was never technically apt to fully play the drums. In December 2002, there was the release of ‘Drumline’ starring young Nick Cannon. No other film before this had brought drumming to the forefront like this. The film was rather successful at the box office with a $56 million dollar total gross.

Devon (Nick Cannon) is a freshman at Alabama A&T University who was recruited to the college due to his drumming skills. The conductor at Alabama A&T Dr. Lee (Orlando Jones) will take this young kid from Harlem and help mold him by film’s end. This can’t be a school film without any drama, there are relationship issues, rivalries with other students, and has a few other issues. The university is well-known alone for its marching band. They have a huge ongoing rivalry with Morris Brown University which has lasted for years. Things will culminate at the BET Classic by film’s end where both schools meet up against each other.

To be honest, I was surprised by the film’s story and performances. We tend to get opinions at times already lingering in our minds about a film before we even view it at times due to the content or the actors in the film. It is nice to be surprised every so often with a film’s content being better than average.

I have seen Nick Cannon in a few films now over the years, and to date this is still one of his better roles. Cannon has a special energy and charisma about himself that helps electrify the screen no matter the role. As much I didn’t like him in the ‘Day of the Dead’ remake, the guy still found ways to be charismatic on screen. I am glad that they didn’t take the character of Devon giving him a shady background as we have seen in other films. That has been beaten to death over the years. It is moments like this that help make ‘Drumline’ enjoyable.
Movie Content: 4/5 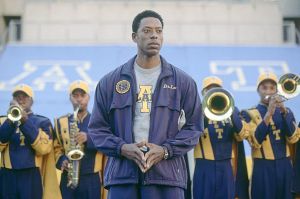 The print is presented in 1080p/AVC MPEG-4 with a 2.35:1 aspect ratio. Not having seen this film previously on DVD, the image is fairly good. Colors are vivid and bright offering a nice pop that wasn’t expected. There is some softness throughout the print, but nothing that hurts the print. Sharpness and details are also very good, with inky looking blacks. A good example of details is to take a look at the bands uniforms, the textures looked insanely detailed. There is some apparent grain throughout the film, but it is not overly distracting. For fans of the film, you will not be disappointed.
Video Quality: 4/5

The audio is presented in DTS-HD MA 5.1 lossless mix. This mix does a great job of taking advantage of the soundfield whenever the band is on screen. Even more impressive is that even sound effects from the film fill the soundfield. In the one area where this mix shines is with the musical performances and score, it makes you feel like your sitting right in front of the band. It’s a great feeling making this a very atmospheric mix. Dialogue is clear and crisp, while there were a few times that it was a bit low.
Audio Quality: 4/5 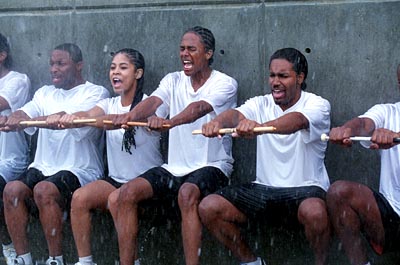 ‘Drumline’ is an entertaining film. My expectations were low of the this film going in and to my surprise this was enjoyable. The video and audio is pretty good for a catalogue title which should make fans of this film happy.
Overall Rating: 4/5 (Purchase for fans, Rental for others)