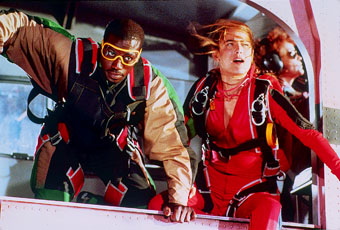 U.S. Marshal Pete Nessip (Snipes) finds his career in hot water when the prisoner he’s transporting parachutes out of a 747 and disappears safely into the night with his deadly cohorts in tow. While Nessip does his best to stop the bold escape, he can’t stop the force from suspending him. But even this isn’t enough to keep him out of action. Instead he does what he must to track down the cadre of techno-terrorists – even if it means skydiving from 30,000 feet in the air. Co-starring Gary Busey, Yancy Butler and Michael Jeter, DROP ZONE is a rush that will keep your adrenaline pumping from beginning to end. 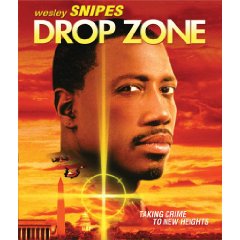 Wesley Snipes stars as a U.S. Marshal who tries to catch some terrorists that hijacked a plane that he was on and their actions resulted in the death of his brother. Snipes believes that it was a set up, but he’s the only one that thinks that, so it’s up to him to figure it out by himself. To do this, Wesley Snipes learns a new hobby and starts skydiving himself while trying to figure out and catch the terrorists in action.

“Drop Zone” is a decent movie and during a period when Snipes was making some good action films. Its plot might be choppy in parts, but that’s not the only thing wrong with the movie. I found some of the acting to be subpar in parts from the surrounding cast and it ends up hurting the film more than anything else. On the flip side, the skydiving sequences are some of the best and most exciting I’ve ever seen in any movie. Wesley Snipes is hilarious in some parts such as when he skydives for the first time and screams the whole way down.
Movie Content: 7/10

The print is presented in 1080p/AVC MPEG-4 with a 1.85:1 aspect ratio. My head kind of hurts after viewing ‘Drop Zone’ on Blu-ray. Lionsgate has been so consistent of late with all their catalog releases, but something seems to have gone wrong here with this print. I almost feel like the upconverted DVD was transferred to Blu-ray with no real upgrade. Colors are very muddy looking with the apparent use of edge enhancement hurting this print even more. The sense of details appear to be lost and even worse is with the backgrounds not looking that great at all. They look as if they were slapped on as an afterthought.
Video Quality: 5/10

The audio is presented in DTS-HD MA lossless 5.1 mix. The video department isn’t too hot for this film, but the audio does help redeem this package. While the audio isn’t the greatest that I have heard on Blu-ray, it helps salvage the disc a bit when compared to subpar video. I was disappointed that the dialogue portion of the mix was on the lighter side which I had to adjust my volume a few times throughout the film. With raising the volume to hear the audio also brings then the issue with having a film’s action sequences sound bombastic. I hate when this happens in several films that I have reviewed. The moments where this track did work was with the skydiving sequences where I felt immersion and a part of the atmosphere.
Audio Quality: 8/5

‘Drop Zone’ is a decent film which I enjoyed to a degree, but taken so every light-hearted. On Blu-ray I was left disappointed with the video looking like pretty much an upconverted DVD. The audio is the saving grace of this package, since even the special features are lacking with just the trailer.
Overall Rating: 5/10