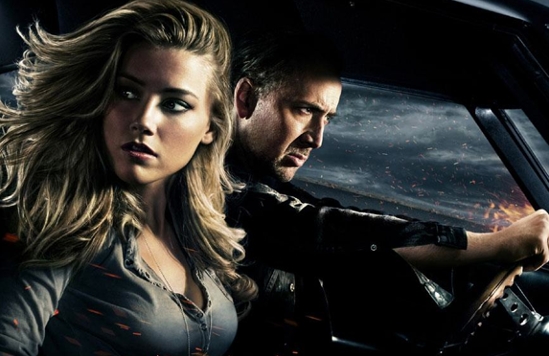 Take lurid 1970s B movies about fast cars and loose women, add a dash of Nicolas Cage at his most deadpan, and sprinkle CGI and 3D technology on top, and you’ve got Drive Angry 3D. Damned badass Milton (Cage) literally busts out of hell to rescue his infant granddaughter from a Satan-worshiping cult leader named Jonah King (Billy Burke from the Twilight movies). On his way Milton picks up Piper (Amber Heard), a blond waitress with a bad attitude and a worse boyfriend. But hot on their trail is the Accountant (William Fichtner), a demonic emissary of ambiguous intentions but unstoppable power. From there it’s a series of car chases, shootouts, and sex scenes, and sometimes sex scenes that are also shootouts (a bit that was done better, it must be said, in the underrated Shoot ‘Em Up). Don’t ask for coherence or common sense; this is a movie where pretty much any character’s main motivation can be summed up as sheer cussedness. Drive Angry 3D maintains a general sleazy good humor, and Fichtner at least is enjoying himself–he’s giving exactly the kind of unexpected, offbeat performance that Cage used to specialize in. (Cage himself is pretty lackluster here, sadly, and wearing one of his worst hairpieces to boot.) This is self-conscious trash; think of it as a companion piece, both in intention and quality, to Quentin Tarentino and Robert Rodriguez’s Grindhouse compilation. 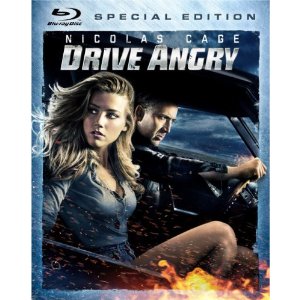 Writer Todd Farmer and director Patrick Lussier really seemed to make the most of their partnership once they started working together. On their own, they brought us films like Jason X, Dracula 2000 and its sequels, and White Noise 2. Other than Jason X getting a pass from loyal horror and Friday the 13th fans, you don’t really hear much about those other films. Drive Angry is technically only the second time Farmer and Lussier have collaborated with one another, but their first outing together was My Bloody Valentine which was actually a hell of a lot of fun. Not to mention the two horror buffs are currently attached to two projects that seem to have been in the works for ages; Halloween III and the Hellraiser reboot. So how would Drive Angry measure up to My Bloody Valentine? Would it be just as fun and would the 3D be utilized properly? How terrible would Nicolas Cage be? Turns out that if you’re a fan of the previous work Farmer and Lussier have become associated with, you have nothing to worry about with Drive Angry.

How is it that every character in the main cast is a total badass? It’s because of that that it’s hard to dislike anyone in the film including Nicolas Cage. Cage seems a little dull at first. When he mutters the line, “Tell him…I’m comin’!” it sounds a bit stiff and it isn’t clear what type of performance Cage is going to give. Milton is actually Cage’s most entertaining role since Big Daddy. He makes it seem so natural to be so angry while also being this unstoppable vigilante that just broke out of hell. Amber Heard’s Piper comes off like she has a bigger pair of balls than any man she comes in contact with. She isn’t afraid to go toe-to-toe with anyone and she usually comes out on top. William Fichtner may be the most entertaining part of the cast. He’s been sent by the big man downstairs to retrieve Milton and bring him back to hell. His quick wit combined with the tricks he pulls off with that coin he carries around and his practically endless arsenal of superhuman abilities cause all eyes to be glued to him whenever he walks on screen. Then there’s Billy Burke whose Jonah King character is a satanic cult leader convinced that he can’t be harmed by anything from this earth. Jonah is such a despicable character that you’re practically rooting for his character to bite it by the time his wicked plan is about to come to fruition.

In addition to the film’s cast, the writing is fairly entertaining as well. If you’re familiar with anything Farmer or Lussier have done, you can pretty much expect events in the film to get a little outrageous or extremely outlandish at times. To tell the truth, that’s half the charm of their films and what makes them so much fun. Does anyone else remember how people were saying that films like Crank or The Expendables were just kind of fun action films that you didn’t have to think hard about? While that statement failed to register with me about those two films since I disliked both immensely, it fits extremely well with films by Farmer and Lussier except their films have a little more of a horror twist to them. The dialogue stood out at times, as well. There’s a line Jonah spits out to Piper that went something like, “I could shoot you in the throat right now and watch you gurgle while I eat my morning grapefruit…” Some may consider that terrible, but the way Burke says it and the context it resides in really hit home with me. Cage also delivers a rather standout speech about how he had to watch his daughter suffer in hell while staring into a barrel of fire that is pretty memorable.
Movie Quality: 9/10

The print is presented in 1080p/AVC MPEG-4 with a 1:85:1 aspect ratio. ‘Drive Angry’ is one of the best looking films on Blu-ray. Colors are vivid and strong with excellent details. Details are excellent almost looking through glass. Blacks are deep and inky. I found the print to be crystal clear with no artifacts or print damage. The darker look and feel of the film looks great with the appropriate lighting making this film standout.
Print Quality: 9.5/10

The audio is presented in a DTS-HD MA l0ssless 5.1 mix. I was quite immersed with this audio mix being a complete sonic boom. This is a demo worthy mix that could easily sell those on the fence about the format. The soundfield is immersive at all times no matter if it is the special effects or dialogue. I was literally amazed with the amount of bullets panning from each speaker in the rears. It sounded as if there were bullets ricocheting off of the walls in the room. Bass was punchy as it shows with the amount of gunfire and explosions. Dialogue is also well placed in the center channel sounding crisp and clear. The best part of this all around aggressive soundtrack is that it is well balanced between the dialogue and sound effects.
Print Quality: 9.5/10

Drive Angry is just ridiculous fun. It has an incredibly solid cast, an excessive amount of explosions and high octane car chases, and there’s enough blood and T&A to satisfy the most deprived R-rated film enthusiasts.
Overall Rating: 8/10