To condemn Dressed to Kill as a Hitchcock rip-off is to miss the sheer enjoyment of Brian De Palma’s delirious 1980 thriller. Hitchcockian homages run rampant through most of De Palma’s earlier films, and this one’s chock-full of visual quotes, mostly cribbed from Vertigo and Psycho. But De Palma’s indulgent depravity transcends simple mimicry to assume a vitality all its own. It’s smothered in thickly atmospheric obsessions with sex, dread, paranoia, and voyeurism, not to mention a heavy dose of Psycho-like psychobabble about a wannabe transsexual who’s compelled to slash up any attractive female who reminds him–the horror!–that he’s still very much a man. 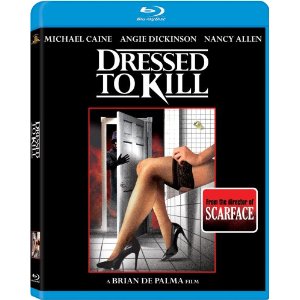 Brian De Palma’s superb thriller borrows the plot structure of ‘Psycho’ (1960) to tell a completely original story in a manner which Hitchcock would surely have admired. The ‘Pure Cinema’ approach deployed here also evokes the best work of Dario Argento, though De Palma clearly has his own agenda. His script attends the fall-out from a terrifying attack on a frustrated housewife (Angie Dickinson) by a razor-wielding maniac who then turns his/her attentions to the sole witness, a streetwise hooker (Nancy Allen) who teams up with Dickinson’s teenage son (Keith Gordon) when she becomes a suspect in the case.

A masterful example of visual storytelling, ‘Dressed To Kill’ employs constantly roving camerawork to propel complex characters through a series of bravura set-pieces (the museum, the elevator, the subway, etc.), filmed in breathtaking Panavision by the late cinematographer Ralf Bode. At a time when most current scope movies are designed primarily for TV – which rather defeats the whole purpose of scope photography! – it’s a revelation to see the entire width of the 2.39:1 frame being used to define characters and advance the plot through an accumulation of visual tricks and counterpoints. Pino Donaggio’s memorable score provides an often thunderous accompaniment to the on-screen horrors, and it’s refreshing to find a grown-up cast (including a restrained Michael Caine) making the most of a scenario which addresses mature themes in an intelligent manner. This intense thriller refuses to sacrifice integrity for the sake of cheap shocks, but it still manages to scale the dizzying heights of genuine horror.
Movie Quality: 9/10

The print is presented in 1080p/AVC MPEG-4 with a 2:35:1 aspect ratio. Fans of the film will be happy that MGM did a good job with the quality of the print. At times I worry how catalog titles will turn out in high definition on Blu-ray, but those that like this film do not need to worry. Colors are well done with a rich color palette. My only issue with the print is the very slight print damage which isn’t noticeable. There is very minimal dirt and white specs that are present. Black levels are excellent. Grain is also present throughout which stays fairly consistent.
Print Quality: 9/10

The audio is presented in a DTS-HD Master Audio 5.1 mix. This mix is good for being upgraded to DTS-HD MA 5.1 filling the soundfield with the score. The film is still front heavy due to the audio design, but when the rears do get action they their not faint. Dialogue comes through the center channel very clear and crisp. I found the dialogue to be much clearer with this new mix.
Print Quality: 9/10

A great classic in the genre of the compulsive killer. It is well done though definitely easy. In many ways it is a remake of Hitchcock’s Psycho, yet it is pure New York and it has some kind of a flavor, that of the modern cop-film. Fans of ‘Dressed to Kill’ will not be disappointed with excellent picture and audio quality.
Overall Rating: 8/10