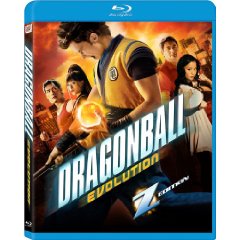 Co-produced by Hong Kong legend Stephen Chow (Kung Fu Hustle), Dragonball Evolution is an agreeable if low-wattage live action adaptation of the iconic manga and anime series Dragon Ball. Director James Wong fuses the series’ fantasy-based characters and devices with a somewhat lackluster storyline involving average teen Goku (Justin Chatwin), who breaks from his wholesale pining for classmate Chi-Chi (Jamie Chung) to that he’s at the center of an intergalactic search for the all-powerful Dragonballs by evil warlord Piccolo (Buffy’s James Marsters). With the help of master Roshi (Chow Yun-Fat, who backburners his stoic screen image in favor of some God of Gamblers/Once a Thief-level hamminess), Goku develops his fighting skills to take on Piccolo and save the Earth. The film’s abundance of martial arts should please younger and less discerning viewers, but its hackneyed dialogue and sluggish pace (especially in the fight scenes, which stutter where they should flow) may disappoint longtime fans of the book and television adaptations. The CGI effects, which labor mightily to reproduce the source material’s eye-popping look, also fall short, though the cast is game, especially Marsters and Chow.

The idea of a live action Dragonball movie brings so much potential to the table, and really changes the perspective of film making in bringing an anime to life, and bringing fantasy to life in a whole new way. This should have been something we have never seen before, it should have been aw-inspiring, captivating, and capturing the very essence of the Dragonball series that so many people have grown up with and come to expect.

Sadly, Dragonball Evolution is perhaps one of the worst movies I have ever laid my eyes on. Within the last two years, we have seen some truly great films including. With Dragonball Evolution, it takes all of the high calbur oscar-worthy/winning acting, and high grade special effects and production values, and pretty much takes it out with one destructive “air-bending” Ka-Me-Ha-Me-Ha(a little inside joke on the movie).

The movie is so out of touch with its source material, this movie can hardly be called “Dragonball”. Outside of name-sake(or Marque value) such as Dragonballs, Goku, Bulma, Yamcha, Shenlong, Ma-fu-ba(sealing technique for Piccolo), Piccolo, Grampa Gohan, Mai, Chi Chi, Master Roshi, Oozaru, and the Ka-Me-Ha-Me-Ha. This movie has next to nothing to do with the original story and characters.
Movie Quality: 3/10

The print is presented in 1080p/AVC MPEG-4 with a 2.40:1 aspect ratio. This is a very stylized film with orange, red, and yellow tints and various dark colors that make the film pop. The color palette is very strongthroughout. The reason is due to the film’s nature, certain colors such as reds stand out the most. Black levels are deep with an ink like look. Details are excellent providing various sense of depth. Scenes up close and when the camera pans away show provide stunning details. This print pops off of the screen giving it a 3-D look and feel. This is a great example of how great films in this genre can look if done right.
Video Quality: 9.5/10

The audio is presented in DTS-HD MA Lossless 5.1 mix. This is one film that takes complete advantage of the lossless sound mix. FOX engineers take yet another action film providing top notch audio. This is a demo worthy mix that could easily sell those on the fence about the format. The soundfield is immersive at all times no matter if it is the special effects or dialogue. I was literally amazed with the amount of panning effects from each speaker in the rears. Bass was punchy as it shows with the amount of gunfire and explosions. Dialogue is also well placed in the center channel sounding crisp and clear.
Audio Quality: 9.5/10

Overall, this movie is about as cliche as you can possibly get by ripping off of better movies like Spiderman and the Matrix, but also being totally un-original, and just making no sense what so ever with its story, characters, and relating to the Dragonball series. On Blu-ray the video and audio are near demo worthy experience.
Overall Rating: 7.5/10