Posted in DVD Reviews by George Theofanopoulos on 15 April 2011 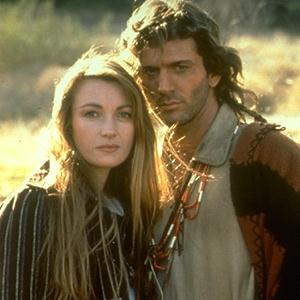 In an age when women are expected to be seen but not heard, Dr. Michaela “Mike” Quinn is a renegade, an independent spirit who forsakes her home in genteel Boston for the rough-and-tumble life of the frontier. But the prejudice she encountered back east pales in comparison to the challenges awaiting in Colorado Springs… DR. QUINN, MEDICINE WOMAN breathed new life into a tired genre and brought families together around the TV for six seasons with its refreshing take on the Western, blending a distinctly modern sensibility with painstaking historical authenticity and tales of courage, conviction, and romance. This collection features all 25 episodes from the third season of the five-time Emmy Award winner starring Jane Seymour and Joe Lando, available on DVD for the first time. 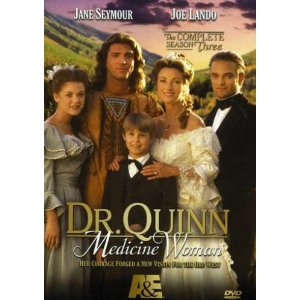 “The Train” is coming to Colorado Springs, and has the town divided. A “Cattle Drive”, has Dr. Mike’s family and Loren mourning the death of Miss Olive, and herding her cattle, now left to Matthew, back to town. There are some great holiday episodes to enjoy, a trip to Washington D.C. to try to help the Cheyenne, and Dorothy’s scare with breast cancer (“Ladies Night”/2 parts) mixes high drama with comic relief as Jake, dressed up as a woman is taken hostage. Sully becomes and “Indian Agent”, the kids Father returns to try and take them back in “Cooper Vs. Quinn”, and Mike stirs up the town with her teachings of the evolution theory in “The Permanence of Change.” Then just when you think things could not get any more emotional, the double episode of “Washita”, will have you in tears as the story of the massacre of the Cheyenne tribe we have come to love, unfolds. Mike and Sully must both deal with the horror of what has happened in their own ways.

The last disc has two episodes, that will have you laughing, smiling and crying. Mike and Sully get ready to tie the knot. The Reverend tries to council them on what to expect in “Ready or Not”, and we see some wonderful flashbacks of the growing love these two share. And then finally “For Better Or Worse”. The feature length wedding episode, that has Mike torn between her family’s wedding plans and the townsfolk. On the more serious end, Custer is out to get Cloud Dancing, and Sully tries to protect his good friend. The wedding, a beautiful event, will at the very least, have you all choked up, and brings back the return of a few favorites from other episodes and even Hank and Jake become unlikely heroes. The closing scene is just too beautiful for words.

There are 25(including the 2 parters) of these moving episodes on 8 discs, and added to the fabulous regular cast, you’ll see some great guest stars. Elinor Donahue, Johnny and June Carter Cash, and Richard Bull among them. The part of Colleen changes about mid-stream from Erika Flores to Jessica Bowman. although just when you get used to the new Colleen, Flores returns for just one episode, and then back to Bowman again. The discs as before, are all in their own keep cases, present a nice picture with good clarity and excellent sound. Disc 8 has commentary from Jane Seymour and Joe Lando which may be listened to during “For Better or Worse”. The buying info here says there are highlights, I could not locate these anywhere. The scene selection is nice and there is a summary of each episode on the discs. And A&E.

Dr. Quinn Medicine Woman has done it again. The third season is just as charming as the first two seasons. Michaela and Sully finally start their lives as a couple, go through some tough times in the process, and finally get married in the season finale.
Overall Rating: 7/10