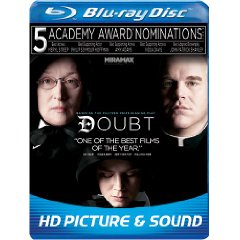 It’s always a risk when writers direct their own work, since some playwrights don’t travel well from stage to screen. Aided by Roger Deakins, of No Country for Old Men fame, who vividly captures the look of a blustery Bronx winter, Moonstruck’s John Patrick Shanley pulls it off. If Doubt makes for a dialogue-heavy experience, like The Crucible and 12 Angry Men, the words and ideas are never dull, and a consummate cast makes each one count. Set in 1964 and loosely inspired by actual events, Shanley focuses on St. Nicholas, a Catholic primary school that has accepted its first African-American student, Donald Miller (Joseph Foster), who serves as altar boy to the warm-hearted Father Flynn (Phillip Seymour Hoffman). Donald may not have any friends, but that doesn’t worry his mother, Mrs. Miller (Viola Davis in a scene-stealing performance), since her sole concern is that her son gets a good education. When Sister James (Amy Adams) notices Flynn concentrating more of his attentions on Miller than the other boys, she mentions the matter to Sister Aloysius Beauvier (Meryl Streep), the school’s hard-nosed principal. Looking for any excuse to push the progressive priest out of her tradition-minded institution, Sister Aloysius sets out to destroy him, and if that means ruining Donald’s future in the process–so be it. Naturally, she’s the least sympathetic combatant in this battle, but Streep invests her disciplinarian with wit and unexpected flashes of empathy. Of all the characters she’s played, Sister Aloysius comes closest to caricature, but she never feels like a cartoon; just a sad woman willing to do anything to hold onto what little she has before the forces of change render her–and everything she represents–redundant.

The movie is really a parable set in 1964 and it makes no excuses about that, and I have no problem with writers or filmmakers wanting to present a tale of morality and its consequences. For every innocent act by Father Flynn there has to be a not so innocent interpretation or action by Father Flynn, the purpose of the whole drama is cast to doubt about Father Flynn’s actions and in the mind of the viewer, in that it succeeds as a parable. But it has to fit within the context of the time period chosen to illustrate the moral problem. There’s no denying that the Catholic Church has a lot to answer for about pedophilia, but watching the bonus feature about the making of the film director writer John Patrick Shanley tells of how he came to write the play this movie is based on. He wrote the play because of a nun that he remembered from first grade. Shanley may want to cast the nun’s as hero’s, maybe he was rescued by one or wished to be, but the problem is Sister Aloysius seems imbued with modern sensibilities that are not out of step with our own point of view, but they are out of step with the times they’re set in, and in the lengths Sister Aloysius goes to confirm her suspicions about Father Flynn.

She is repeatedly told to stop but doesn’t, and in fact steps up her attacks on Father Flynn. I was an altar boy a few years after the period the film takes place in, and even then the priests word was law, and if a priest told a nun to stop something and she didn’t she would have been transferred out of the parish pretty quick. There is a hint that Sister Aloysius wasn’t always a nun in that she mentions having a husband during WWII and it really stands out because there is no other hint or idea that Sister Aloysius had a life outside of being a nun. Is this fragment a leftover part of a subplot that something from Sister Aloysius’ life was informing the way she acts? If so, it should have been developed more, if that’s what it was meant to do. The ending doesn’t stay true to the concept of doubt either, although it makes a stab at claiming it does. Sister Aloysius gives us a logical and definite resolution as to what occurred with Father Flynn, so that when she confesses her doubts it rings falsely because we’ve already been presented a definite resolution and one that would confirm her suspicions as true.

If ‘Slumdog Millionaire’ did not win movie of the year than ‘Doubt’ would have been next in line to win as this film is a gem. The cinematography, the acting, the characters, the director, the place all just come together so well. Meryl Streep just steals the show here with her performance from beginning to end with her energy taking the story to places that one could only imagine. Just watching her sit on that bench at the end of the film thinking through as to what just happened really captures what a really good film that this is.
Movie Content: 10/10 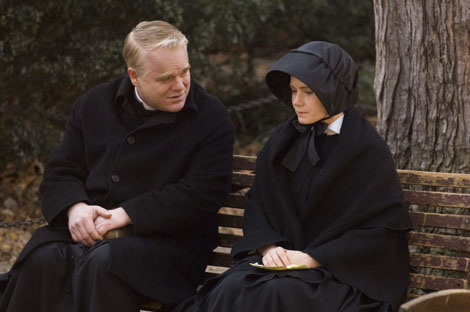 The print is presented in 1080p/AVC MPEG-4 with a 2.35:1 aspect ratio. The print looks very good throughout without any apparent issues. Colors are vibrant and carry pop which brings out the fine details. The detailed scenes stand out very well. Blacks are deep. I found the print to be crystal clear with no artifacts or print damage. The darker look and feel of the film looks great with the appropriate lighting making this timepiece film standout. Overall, this is a fairly impressive print from Disney.
Print Quality: 9.5/10

The audio is presented in Dolby TrueHD 5.1 mix. This is not an audio mix that you will go in expecting huge things from the soundfield as it is primarily a dialogue driven film. The dialogue is clean and clear through the center channel with no apparent issues. I was rather happy with the way the film sounded considering that this was more of a dialogue centric film.
Audio Quality: 8.5/10 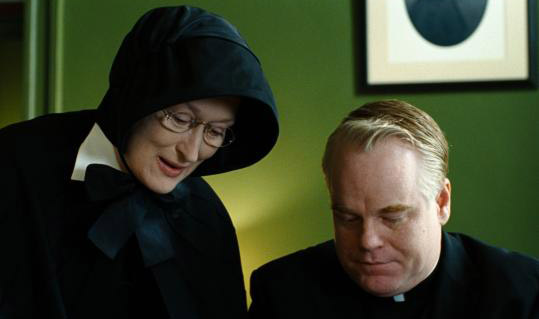 ‘Doubt’ is an excellent film that would have been my choice for Best Film of 2008, but the Academy felt different. The film was nominated for five Academy Awards earning each nomination. I highly recommend ‘Doubt’ as a purchase since you will not be disappointed.
Overall Rating: 9/10