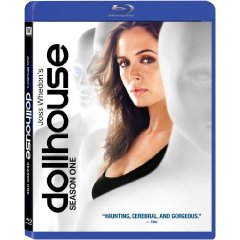 This is a show that lives and thrives in a very gray area – it’s unclear who the heroes might or might not be, and this is shaping up to be a nuanced, character-driven ensemble show. At its heart, this is a show about the identity of “self” without memory. About science and ethics. About exposing our darkest human fantasies, and exploring the root of the needs that create them. The show is not just about the “dolls,” but is also about the clients – why do they need a fake person to save them?

It’s pretty much universally acknowledged that Dollhouse’s first episodes are uneven and a little weak. The first five episodes of the show seem to waffle and go nowhere – Echo gets an assignment, puts herself in danger, succeeds at the assignment, and has her memory erased. Oh sure there are a few subplots going on, but for the most part the show seems to be coasting during those early episodes. The assignments are not particularly exciting, and in some cases border on being ludicrous. The show is watchable, but it’s fairly mediocre television.

I am glad that I stuck it out due to Joss Whedon’s past favorites like Buffy, Angel, and Firefly. After six episodes, the show takes a turn for the better. There is a critical episode that demonstrates fundamental assumptions that you, the viewer, have made about the show are false. And suddenly things get a lot more interesting. At that point, the show picks up steam, things that have only been hinted at before start coming into focus, the show stops being structured around the assignments, and more importantly: the show becomes much more of an ensemble drama that focuses on a bunch of interesting characters, rather than on just Echo who is not compelling enough to sustain the show on her own – but works great as the element of a larger cast.

Don’t watch Dollhouse expecting it to be like Buffy, Angel, or Firefly. Of course there are points of similarity, but this show has a very different, darker, more intense feel. The jokes are fewer and farther between, but in their place is an intriguing situation that will be rewarding to explore. Of course, as in Whedon’s other shows, there are quirky and fascinating characters — but fewer heroes and villains.
Movie Quality: 8/10

The print is presented in 1080p/AVC MPEG-4 with a 1.78:1 aspect ratio. Colors are bright and vibrant providing washed out colors in certain scenes. Blacks are deep with an ink-like appearance. Fleshtones are accurate and natural. The issue that I had with this print were in the details department as they were a bit on the softer side. Other than that, this print is free from any artifacts or issues.
Video Quality: 9/10

The audio is presented in DTS-HD MA Lossless 5.1 mix. Audio is immersive with the DTS-HD mix was added with the surrounds getting usage anytime there are effects. I was rather impressed with the sound design compared to what was available on broadcast television. Dialogue is well placed and clean through the center channel yet there was an issue with the audio mix being too low at times.
Audio Quality: 8.5/10

All special features are presented in high definition with the inclusion of three commentaries total, fans will not be disappointed. With the addition of the unaired pilot and a bonus episode this is a nice complete set.

Although “Dollhouse” started off on shaky legs (and the third episode featuring the back-up singer storyline was just as truly awful as it looked), once it found its voice it sucked you in until the final minutes, filled with enough thought-provoking twists and turns to ensure fans’ eager return next season. On Blu-ray this set offers stellar video and audio. Fans of this series will not be disappointed.
Overall Rating: 8.5/10