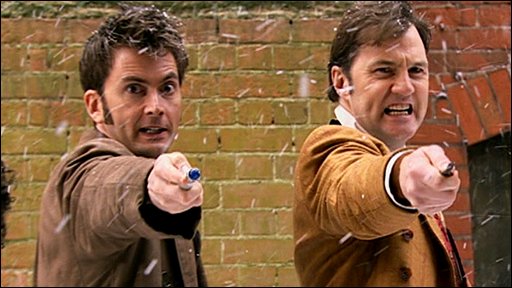 Matt Smith and Karen Gillan star as the new Doctor and his companion in an all-new series of Doctor Who. After his explosive regeneration, the Eleventh Doctor awakes to discover his TARDIS is about to crash! After falling from the sky, he pulls himself out of the wreckage to come face-to-face with young Amy Pond. The Doctor promises to take Amy to the stars. But first they must divert an alien plot that could destroy the Earth. The Doctor makes good his promise, and Amy boards the regenerated TARDIS, ready to take to the stars on a series of wild adventures that will change her life. As always, wherever the Doctor goes, his oldest enemies, the Daleks, are never far behind. They are hatching a new master plan from the heart of war-torn London in the 1940s. But they are not the only strange creatures the Doctor and Amy must face – there are also alien vampires, humanoid reptiles, the Weeping Angels, and a silent menace that follows Amy and the Doctor around wherever they go. 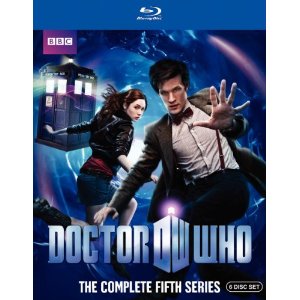 As the fairly wonderful David Tennant moves on to do whatever, Matt Smith steps thru the door as the new and the eleventh and the youngest Doctor yet. And while I count Tom Baker as my most favorite Doctor ever, this new guy rapidly wins me over. This latest incarnation of the Doctor – youthful-faced (for someone 907 years old) and leany-gawky and so floppy-haired that Conan O’Brien isn’t amused – is a bit high strung and yet has that twinkle in the eye. The eccentricity is a given, as is that he still champions the human race. And the Doctor is clearly having fun, welcomes each dawning adventure with open arms, he does. It helps that his new companion – the rather fantastic Amy Pond (a superb Karen Gillan) – is as equally excited. I am loving the new blood. And this Doctor coins the best nickname for himself yet: “space Gandalf.”

This season tells the life of Amelia Pond. The first episode, “The Eleventh Hour,” sold me on the new Doctor, had me relishing the fairy tale angle. There’s an almost mythic archetypal element to the Doctor and Amy Pond’s relationship. It dates back to how they met. “The Eleventh Hour” opens one evening with an earnest Scottish seven-year-old named Amelia Pond praying for someone to come and fix the scary crack in her bedroom wall. And when the disoriented new Doctor appears from nowhere to hang out and taste various foods (fish custard?) and to examine that notorious wall crack, little Amelia Pond understandably takes to him. So much so, that many years later the Doctor still has a place in the adult Amelia’s mind (Amelia who is now Amy). Twelve years after the Doctor first met Amelia, he resurfaces, very tardy on his promise. He resurfaces in the bare nick of time. Because while he’d been gone, something sinister had stayed with Amy Pond all these years. Just what is the secret of… Prisoner Zero?

A few things to take from this episode. One is the chemistry between Matt Smith and Karen Gillan (both of them are irrepressible). Then, near the end, the Doctor has a moment of sheer asssownery as he absolutely cows an encroaching alien spacecraft (“Hello, I’m the Doctor. Basically… run.”). Finally, we hear Prisoner Zero’s ominous prophecy and realize it to be this season’s recurring plot thread: “The universe is cracked. The Pandorica will open. Silence will fall.” That crack is growing ever wider. Oh, snap.

A new interior set design for the Tardis. A new retro wardrobe for the new Doctor (bow ties are cool again). A new companion. But the tropes are familiar. The time travel. The alien planets. The Daleks. The last surviving Time Lord applying his smug and his compassion and intellect to save the day. And so on, so on. This season allows us to gaze at weeping angels and vampires in Venice and at the very last of the star whales. We take in an insidious dream lord and a faithful lone plastic Roman Centurion, and let’s not forget the attack of the evil geriatrics. And Starship UK. We even see the Doctor brush elbows with Winston Churchill and Vincent Van Gogh. All thirteen episodes are fine and I love the many bits of continuity callbacks, but I’ve got preferences. “The Eleventh Hour” is fantastic for the reasons already mentioned. “The Time of Angels” is creepy, creepy, creeeeepy. The riveting two-part season-ender (“The Pandorica Opens” & “The Big Bang”) has the Doctor racing against time to solve the puzzle of that crack in the wall which could spell doom for all time and all the stars in the sky. And there’s also a wedding and crazy dancing at the wedding. And possibly Karen Gillan’s finest moment in this show so far.
Movie Content: 8.5/10

Overall, despite one true clunker, one weak two-parter, and some pacing problems at the beginning, this was an amazing, amazing season that met and exceeded my expectations. Can’t wait to see where the series goes next!.
Overall Rating: 8/10