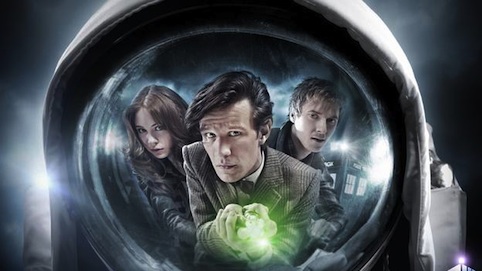 I’ve enjoyed every story of this series so far which is something I cannot say about series 1-5. Matt Smith is by far the best actor to have taken on the role of the Doctor since the show came back in 2005, and he might just be the best actor since 1963! Tom Baker will always be my favorite Doctor but Matt Smith is easily my second favorite by far. He is the perfect embodiment of the Doctor. He “gets” the character, that much was evident from his very first scene..

Doctor Who Season 6 brings everything to the table a Who-fan would come to expect; you’ve got very interesting episodes all featuring a new story, intertwined by an underlying story that climaxes as the series progresses. Many questions are answered and, of course, even more questions are raised.

I do feel as though the show has been tailored a bit towards Matt Smith’s style, though I can assure you this is not a bad thing. Every Doctor has their own “thing” that makes you fall in love with them; Christopher Eccleston with his “Fantastic!” catch phrase, very enthusiastic voice, and strong emotion for Rose. David Tennant with his unique mannerisms, “Allons-y!”, and admiration of his own brilliance. Matt Smith with his “*insert object here*’s are cool!”, his insistence on calling Amelia, “Pond”, regardless of the fact she’s married, and his love for both Rory and Amy. This series is the scariest, most thrilling of them all, so watch out for that…!

The trio of Amy, Rory, and the Doctor balance out much better in this series than in the previous. I’ve always felt that the drama between the Doctor and Rory fighting over Amy was silly. It was a little too outlandish; even for Doctor Who. However, they’ve stabilized that, allowing for them all to get along perfectly. Amy has her heart in the right place, knowing that although the Doctor will always be there, Rory will always be her Roranicas, her Roman in shining armor. The girl and boy who waited. I find this flows much better, and you can tell the Doctor respects this when he first asks Rory if it’s ok if he hugs Amelia Pond.

Also, a special treat is in store for you in the final episode of this collection. I don’t want to state too much and ruin it for you, but I will say I’m certain you will enjoy the final episode very, very much.
Movie Quality: 9/10

The audio is presented in a DTS-HD HR 5.1 mix. While I am not surprised that Warner would go with a DTS-HD HR 5.1 mix here and not a lossless which doesn’t help the format. It is 2011 and we should be at lossless audio for our Blu-ray releases. Dialogue was front and center with no apparent issues sounding crisp. The soundfield was rather active anytime there were effects in the soundfield even though this is a dialogue driven television show. I do think that this could have sounded even better with lossless audio mix.
Print Quality: 8/10

For those of you sci-fi(or old Dr. Who) fans who tried watching but didn’t like the show, or lost interest in the show after the 2005 premeire, this is nearly a completely different production. The production quality, writing, casting and directing is far and away at a higher calibre, and with this past series, is not only maintaining its momentum, but is getting better.
Overall Rating: 7/10