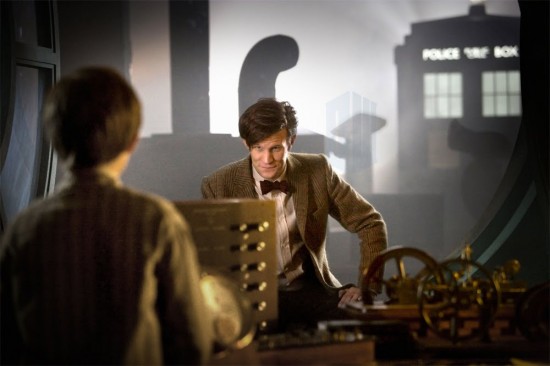 Combining the whimsical science fiction of Doctor Who with the Victorian sentimentality of Dickens’s A Christmas Carol may seem silly at first glance, but it turns out they’re a perfect fit–A Christmas Carol is, after all, already a time-travel story. On a distant planet, the Doctor (Matt Smith) confronts a miserly curmudgeon named Kazran Sardick (the brilliant Michael Gambon, The Singing Detective), who holds the key to the survival of the Doctor’s companion, Amy Pond (Karen Gillan), and thousands of others. To crack open this miser’s heart, the Doctor decides to take Sardick to Christmases Past, Present, and Future… only these journeys involve a flying shark, a deep-frozen beautiful girl, and some of the funniest dialogue in the entire history of Doctor Who. Written by Steven Moffat, who shepherded the remarkably high-quality fifth season of the show, A Christmas Carol is bursting with clever ideas, gleeful moments of comedy, and a deft bit of genuine sadness. Smith has settled into the role of the Doctor with aplomb, tossing off wild curlicues of rapid-fire thought with boyish zip and sly timing. This is an outstanding episode of an engaging series that deserves a much wider following. Extra features include an excellent making-of documentary and a video of a symphonic concert of music from the series. 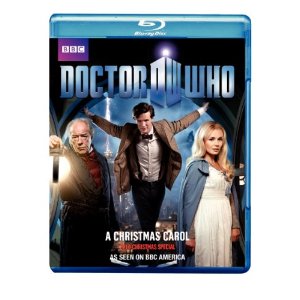 Christmas gets shoehorned into Doctor Who every year now. In past specials, like “The Christmas Invasion” and “The Runaway Bride”, the fact that they took place at Christmas was incidental. You could’ve removed Christmas from the story with the change of a couple lines and have essentially the exact same story. That is not the case with the 2010 special, “A Christmas Carol”, which incorporates Christmas fully into the plot.

Our story centers around an elderly miser (Michael Gambon, not given much to do here), who lives in a planet with skies full of ice clouds in which swim schools of fish. Said planet appears to be in either the 19th or 42nd century. He’s a cruel old man who, when told that a spaceship is about to crash on his world and kill 4,003 people unless it’s given permission to make an emergency landing, basically just shrugs and says “Life’s not fair.”

On board the spaceship are Amy and Rory (strangely dressed in outfits from earlier in the fifth series. I’m not entirely sure why, though given that they’re on their honeymoon, I’m sure some slash-fiction writers out there have some ideas), as well as the Doctor. When he hears of the situation down below, the Doctor goes to the planet, casts himself in the role of the Ghost of Christmas Past, and proceeds to change the miser’s past in the hope of making him into the sort of man who would allow the spaceship to land. Eventually he and the miser wind up spending every Christmas Eve paling around together, along with a woman who is kept in suspended animation the rest of the year and who, as it turns out, is hiding a dark secret…

There’s a lot to like in this story. The production values are, as always, quite good, and it’s nice to see the Doctor, Amy and Rory again after not seeing them for several months. There were bits of real emotion to the story as well, provided you didn’t stop to think about it too hard, and the concept of a world where there’s ice clouds so thick that fish can swim among them is pretty cool. And of course I was very pleased and very grateful to BBC America for broadcasting this on Christmas.

But there’s a lot of flaws as well. Michael Gambon brings his usual level of performance and talent to the screen, but isn’t given all that much to do with it, and spends most of the first couple acts staring at images projected on a wall. There’s also the fact that, yet again in the series, we see a distant future that looks an awful lot like the past. Does anyone really think people in the year 41XX will be living in conditions identical to those of Victorian London? Then there’s the timey-wimey stuff with the Doctor messing with someone’s past but not using the same time travel tech to save someone else from a TV illness. And I really wasn’t big on the singing of “Silent Night”. The concept and how it was used was fine, but I’ve never much cared for the song.

I didn’t hate this story, but I didn’t really like it all that much, and that’s a shame cause I really wanted to. I think it came from a good place and I do think that the people behind it had a germ of a good idea. Using A Christmas Carol as the framing device for a story is not a bad notion. But that idea was very quickly buried under a lot of the sort of silliness that has come to define new Who and on the whole could have benefited from at least a couple more rewrites. Still and all, it was at least nice to see the show again after so many months of it laying dormant. Now we can look forward to the next series starting up!
Movie Content: 9/10

What a great gift BBC America gave us this year with their airing of Dr Who: A Christmas Carol. Matt Smith was in top form, and while there were a couple of loopholes in the plot as noted by other reviewers the writing was otherwise strong and the wit quick.
Overall Rating: 8/10