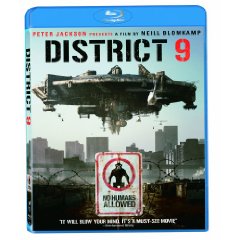 A provocative science fiction drama, District 9 boasts an original story that gets a little lost in blow-’em-up mayhem. Set in Johannesburg, South Africa, District 9 begins as a mock documentary about the imminent eviction of extraterrestrials from a pathetic shantytown (called District 9). The creatures, it turns out, have been on Earth for years, having arrived sickly and starving. Initially received by humans with compassion and care, the aliens are now mired in blighted conditions typical of long-term refugee camps unwanted by a hostile, host society. With the creatures’ care contracted out to a for-profit corporation, the shantytown has become a violent slum. The aliens sift through massive piles of junk while their minders secretly research weapons technology that arrived on the visitors’ spacecraft.

Against this backdrop is a more personal story about a bureaucrat named Wikus (Sharlto Copley) who is accidentally exposed to a DNA-altering substance. As he begins metamorphosing into one of the creatures, Wikus goes on the run from scientists who want to harvest his evolving, new parts and aliens who see him as a threat. When he pairs up with an extraterrestrial secretly planning an escape from Earth, however, what should be a fascinating relationship story becomes a series of firefights and explosions. Nuance is lost to numbing violence, and the more interesting potential of the film is obscured. Yet, for a while District 9 is a powerful movie with a unique tale to tell. Seamless special effects alone are worth seeing: the (often brutal) exchanges between alien and human are breathtaking.

The story about the mistreatment of those that are different from us is universal to every country in the world. Perhaps that accounts for the popularity of this film when it was released. As Wikus becomes one of them, he is exposed to their treatment and how they are perceived. By becoming one with them, he learns in the process and his outlook on his life and the world around him changes.

As with all great science fiction films, the story is the centerpiece but the surrounding portions add to the whole. The special effects are magnificent, offering us a look at an alien life form that looks as if it is right there, shot on camera without the use of effects. It makes the story all the more believable. And the performances by stars that are relatively unknown in the US make them seem real as well. While grounded in sci-fi, the film makes it seem as if it’s taking place now.

Slow going at first, we are given a look at a world we think we known inhabited by creatures we do not. It takes a bit of time to learn about them as well as about ourselves. And in the end, the story we witness makes us think a little bit more about how we react to others. At least let’s hope that those who see the film do.

The audio is presented in DTS-HD MA lossless 5.1 mix. This is a very immersive soundtrack during the action sequences. This is a film where there are a lot of action and chase sequences. Those looking for an audio mix that will take advantage of your equipment, this is the film for you. This is a very well done audio presentation that has dynamic range with the sound effects and a lot of panning from speaker to speaker. Dialogue is clean and crisp through the center channel.
Audio Quality: 9.5/10

‘District 9’ came as a surprise to me which I had high expectations for going in and at first was put off by the slow pace. The film really took off becoming one of those special science fiction films that I am proud to own in my collection. The video and audio are superb which will make Blu-ray owners happy. The special features are really well done and then add the nice addition of the ‘God of War III’ demo for the playstation 3. This film is highly recommended for all science fiction fans.
Overall Rating: 9/10