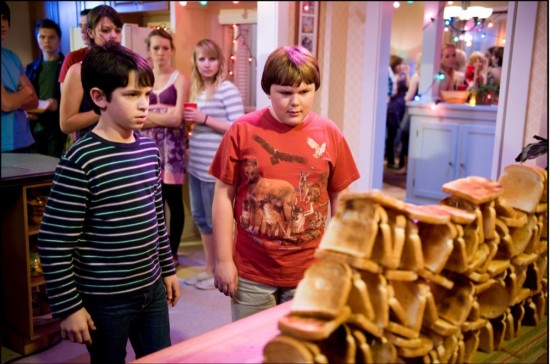 Brothers aren’t supposed to get along, so it should come as no surprise that Greg and his older sibling Rodrick fight continuously. However, their mother has a different idea about what the relationship between two brothers should look like, and she writes a column about it for the local newspaper, so she should know. Never one to let nature take its course, Mom tries a variety of strategies to get the boys to bond–everything from the incentive-driven “mom bucks” to punishing them by leaving them home together for the weekend while the rest of the family heads to the water park. The wild party and ensuing chaos that one would expect when two boys are left home alone happens right on schedule, but so does a surprising development in the boys’ relationship with one another. Greg pours his every thought about the difficulties of surviving middle school and living with brothers into his journal in this film, which is based on Jeff Kinney’s book Diary of a Wimpy Kid: Rodrick Rules. 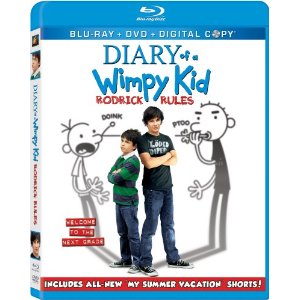 Greg is now in 7th grade and got rid of the cheese touch, he is no longer the kid who has to sit on the floor by trash cans like he did in 6th grade. In the sequel, Greg starts to fall for the new girl at school, Holly. At home, Greg’s mother tells him and Rodrick, Greg’s older brother, that if they start to get along she will pay them in “Mom Bucks” which can be traded in for cash. Rodrick is on a mission to act like they are getting along well, but when their parents go out of town, Rodrick decides to throw a party, even though they aren’t allowed to. Rodrick forces Greg to not tell his parents or he will kill him. But the secret of the party suddenly brings them closer and they begin to act civil to one another, they start to become the best of friends.

Wow, this movie was better than the first. I liked the first one, I thought the first one was good but this one seems to have better story. I really liked the relationship between the brothers. Even though they wouldn’t admit it to each other, it was clearly obviously how much they meant to each other even though they would pull awful pranks on each other. This movie is highly recommend and won’t disappoint. It is clearly better then the first!
Movie Quality: 9.5/10

The print is presented in 1080p/AVC MPEG-4 with a 2:40:1 aspect ratio. Colors are deep and well saturated throughout the entire presentation. Blacks are strong and almost inky at times. Nowhere did the image ever appear soft with such strong colors and black levels. Flesh tones were also natural. There is some subtle grain in a few scenes, but never a distraction. Fans of the film will not be disappointed.
Print Quality: 9/10

The audio is presented in a DTS-HD MA l0ssless 5.1 mix. “Rodrick Rules” is a dialogue-driven film that is mostly front and center channel driven. There really wasn’t anything that stood out, audio-wise especially for the surround channels. If anything, it’s all about the dialogue and the dialogue on the lossless soundtrack is crystal clear. I detected no hiss or any audio problems while watching the film.
Print Quality: 9/10

Overall, I recommend you see this movie if you like the books or liked the first movie. Diary of a Wimpy Kid: Rodrick Rules is a good family movie that people of all ages can enjoy. I hope the next movie includes more jokes but has as good of character development as this had.
Overall Rating: 8/10