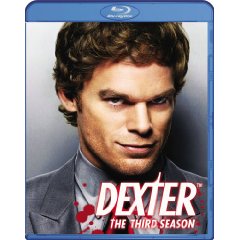 Dexter is an American television drama series that airs on American premium channel Showtime. Set in Miami, the series centers on Dexter Morgan (Michael C. Hall), a serial killer governed by a strict moral code who works for the Miami Metro Police Department as a blood spatter analyst.

Dexter is, hands down, the most brilliantly written television series I have ever watched. The pacing is downright perfection, the story telling and weaving is an absolute powerhouse of entertainment. Plus, the dialogue is nothing short of utterly amazing.

The cast is something that award shows lust for. Michael C. Hall was always brilliant on Six Feet Under. Since episode one he has proven that he can make a totally different character. This season is full of twists and turns which come like an 18 wheeler truck from out of nowhere. They blindside you like any great mystery and story does. Constantly brilliant is an understatement when it comes to Dexter and his way of thinking and the problems he faces.

Season Three is a worthy addition to the Dexter library, a series that explores new aspects of his personality, while remembering to address the core concerns of his relationship with his sister, his memories of his father and his nocturnal practice of cleaning up the streets of Miami. With the new truths of Dexter reveled in Season Three, you may start to question whether Dexter targets criminals because of the Code and because they are easy prey or whether Dexter does indeed have feelings and believes he is bringing justice and order to the world with his noble deeds.

Dexter explodes with season 3. If you’re wondering how each season can just keep getting better and better, join the crowd. Each episode in season 3 is absolutely mesmerizing. The razor-sharp humor is there, of course, but wait until you see Jimmy Smits play Miguel Prado. You simply won’t believe how amazing he is. The action is gripping, explosive, etc., etc. I know I’m gushing, but it is so very deserving of the highest rating I can give it. After watching season 3, you won’t be able to deny that Dexter rocks! The entire ensemble of actors, Michael C. Hall, especially, deserve accolade after accolade.
Movie Quality: 10/10

The print is presented in 1080p/AVC MPEG-4 with a 2.35:1 aspect ratio. I found the third season of Dexter to have improved video quality over the previous two seasons on Blu-ray. In both Seasons1 and 2, grain and noise weren’t controlled as well and it became distracting. Here in Season 3, it is better managed to the point where it is almost non existent and you have to really look for it. Colors are bright and vibrant providing washed out colors in certain scenes. Blacks are deep. Fleshtones are accurate and natural. Details are excellent, providing even some of the minute details on screen.
Video Quality: 9.5/10

The audio is presented in Dolby TrueHD 5.1 mix. ‘Dexter’ is a dialogue heavy television show and it really shows with how well the audio is placed through the center channel. Dialogue is clean and clear providing some excellent depth. For a television show, I was rather impressed with how clear the audio is. This is a more front heavy presentation as the rears do get some workout, but not much. There are some effects that come through the rears.
Audio Quality: 9/10

There are not too many shows that get better with each passing season and ‘Dexter’ has become one of those shows. I have never caught this on broadcast television and the Blu-rays were my first entry into this series. Come this fall you better believe that I will subscribe to Showtime to enjoy Season 4 from the start. On Blu-ray the video and audio continue to amaze, while the supplements are rather disappointing. This is one of the best television shows that will keep you interested week in week out.
Overall Rating: 9.5/10