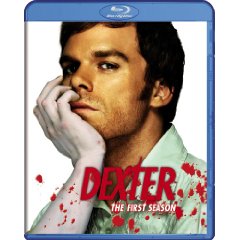 ‘Dexter’ is a very fascinating television show, based off of the novel ‘Darkly Dreaming Dexter’. The novel was released in 2004 by Jeff Lindsay and would be the basis for the Showtime television show, ‘Dexter’. A television series would be green lit in 2005. I have never read the novel, but have heard great things about it and even more so with the television show. This is my very first viewing of ‘Dexter’ since we do not have Showtime, but a show like this is well worth subscribing.

The premise behind ‘Dexter’ is rather unique as we have a serial killer that actually works with the police as a forensics expert. Dexter (Michael C. Hall) spends his career as a forensics expert working with the Miami Metro police. He takes the notion that if he is going to catch the evil scum on the streets, he must not only think like them, but also act like them. He has made a living going after criminals that were able to get away with their crimes. As he stalks these criminals, there are a lot of pieces of his past that uncover as the story moves along. It leaves the viewer thinking about the reasoning behind these murders. What kind of person is Dexter that he takes justice into his own hands?

The pieces of his past fall into place piece by piece with each passing episode. It all leads up to some shocking revelations about Dexter. Then add Dexter’s personal life into the mix and you have for one very interesting story. We see a lot of interaction with his co-workers, his girlfriend Rita (Julie Benz), and his half-sister Deb (Jennifer Carpenter) whom is a police officer. It is a rather interesting ride with his and Rita’s relationship and even more with Deb. Deb is Dexter’s only remaining family member, so he really looks after her like a hawk.

I have to commend that the writers can take this many cast members and tell a great story over 12 episodes. The side stories are rather involving and interesting, so props out to the writing team for pulling things together very well. Hall does a superb job as Dexter, playing the dual persona very well. I would have never of thought Hall whom was also in ‘Six Feet Under’ would play this role so well. It is very rare to see a serial killer that is killing people for the good of society. This is a relatively nice spin in this complex world that we live in. Considering that Hollywood always takes the serial killer portraying them in a different light, this is new and fresh.
Movie Content: 4.5/5 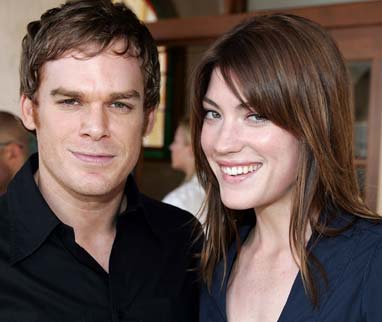 The print is presented in 1080p/AVC MPEG-4 with a 1.78:1 aspect ratio. Colors are bright and vibrant providing washed out colors in certain scenes. Blacks are deep. Fleshtones are accurate and natural. Details are excellent, providing even some of the minute details on screen. There is grain throughout the presentation where at times it does get a bit heavier than usual so it could be a distraction. There is also noise throughout and this does become a bit more distracting. Besides some of these small inconsistent issues, the print is good.
Video Quality: 4/5

The audio is presented in Dolby TrueHD 5.1 mix. ‘Dexter’ is a dialogue heavy television show and it really shows with how well the audio is placed through the center channel. Dialogue is clean and clear providing some excellent depth. For a television show, I was rather impressed with how clear the audio is. This is a more front heavy presentation as the rears do get some workout, but not much. There are some effects that come through the rears.
Audio Quality: 4/5 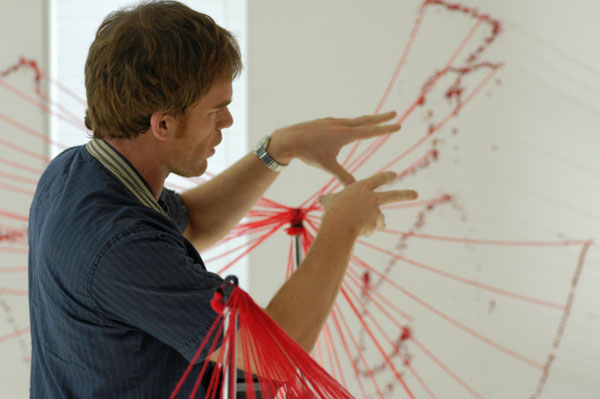 ‘Dexter’ Season 1 on Blu-ray is a nice addition to Blu-ray as we need more television shows in high definition. While the video quality can be spotty at times, the audio is really good for the television show. ‘Dexter’ is a really good television show that should not be passed up for fans of crime drama and even a touch of horror/suspense. I highly recommend this show as a purchase for fans and those looking to get into a new show they have never seen.
Overall Rating: 4/5 (Purchase)