An air of desperation in the somewhat implausible story lines that have fueled Desperate Housewives since it made such a splash with its premiere in 2004 is never very far from the perfectly groomed homes and messy private lives of the women of Wisteria Lane. But as frantic, lunatic, or downright preposterous as the soap-operatic antics may seem, whether unfolding behind closed doors or right out in the open of suburban Fairview, USA, creator Marc Cherry keeps on giving devotees of Desperate Housewives exactly what they want in season seven. The big news for fans of the show (who are the only ones who will care or understand what any of it means) is that Paul Young is out of prison and back in the lives of the housewives and their husbands; newly separated Bree Van de Kamp has a studly new boyfriend 15 years her junior; and a replacement housewife has moved into the neighborhood, returning the gang’s fluctuating membership to its prime value of five. 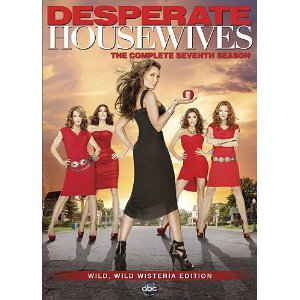 This show used to have great writing but now the dialogue and plot developments are straight out of afternoon soap operas. Also, the characters who are being emphasized are ones who are now driving me crazy. And boy, does Teri Hatcher, as Susan lead that pack! I just wince every time she comes onscreen. I find her goody two shoes act really tiresome at this point. Ditto her marriage with Mike.

I could have done without Vanessa Williams. If she is supposed to be the new Edie, that didn’t pan out. She’s playing a very similar role to the one she played on UGLY BETTY. Just like Susan, she too is super tiresome. She is a woman used to living in New York who is now living in the burbs and it just doesn’t make any sense that she is.

The other three are better overall. They are pretty much the characters they have always been. Bree is dating a man much too young for her. Gabby finds out she has a daughter who is being raised by a lower class Mexican family. Felicity Huffman’s Tom becomes a raging success and she can’t stand it. Although this wasn’t groundbreaking material, it was at least more like the other six seasons.

And on and on we go. I think we are close to the end of the road here and that Wisteria Lane is due for some demolition work, like razing it to the ground, if the writers don’t get some better material going with a focus on the remaining three housewives of interest.

Some of the plot twists in this season felt somewhat forced, and with the season finale that happened with Gabrielle’s stepfather left me with the sinking feeling that with that episode, this show that I have loved for a long time may have jumped the shark.
Overall Rating: 7/10