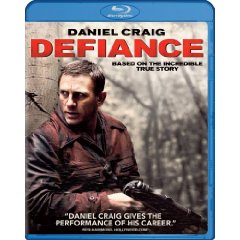 Three ferociously committed actors fill the roles of the Bielski brothers, Jewish partisans who escaped into the forests of Eastern Europe during the Second World War. Daniel Craig (taking a break from 007 duty) is Tuvia, the leader of a group of refugees who eventually number over a thousand; Liev Schreiber is Zus, the antagonistic warrior; and Jamie Bell is Asael, a peacemaker no less devoted to the survival of the community. The three performers give life to director Edward Zwick’s account of this little-known chapter of Jewish resistance to the Holocaust, which otherwise plays more like a history lesson than a full-blooded movie. The film’s best achievement is its strong location work, in Lithuania–as the community makes its home in the forest, the landscape becomes an important player in the drama at hand, and the changing of the seasons is charted with bone-chilling detail. Schreiber manages to get a little wry humor into this otherwise sober enterprise, and Daniel Craig creates an unusual character: a sort of anti-Bond, a hero whose body is all too fallible and whose decision-making is sometimes hesitant or morally compromised. It’s a rare hero in a World War II movie that tends to withdraw from scenes rather than stride into them, but that’s what Craig does. More than likely, the movie’s main achievement will be sending the curious to read the histories of the Bielski brothers and why they matter in the chronicles of the Holocaust.

Director Edward Zwick likes his epic war films full of tragedy and thick accents. With Defiance he’s chosen a seldom explored true story of Jewish rebels fighting back against their Nazi aggressors in the Belarusian forest; but even with the stage set for heart-wrenching drama and tragic wartime attrition, the film can’t quite manage enough emotionally engaging pathos for its band of oddly anti-heroic protagonists.

After escaping Nazi-occupied Poland during the onset of World War II, three Jewish brothers, Tuvia (Daniel Craig), Zus (Liev Schreiber), and Asael Bielski (Jamie Bell) flee to the Belarusian forest where they encounter several other refugees. After numerous casualties from hasty attacks on German soldiers, Tuvia decides that revenge be substituted for survival and begins constructing a village in the forest to shelter his comrades and the growing influx of Jews fleeing Poland. Zus, opposed to Tuvia’s more peaceful tactics, opts to join Russian partisans operating nearby, but fate and a common enemy will find their paths crossing once again.

Defiance certainly feels like an Edward Zwick film, full of heavy dramatic action, sweeping epic conflicts and historical significance. But like his other political and war driven films Defiance falls short of being something truly special due to a lack of investment with the characters. The settings, costumes, cinematography and acting are all first rate, but the development of lead roles and even supporting characters leaves something to be desired, especially when the end of the film abruptly rolls around and great revelations or emotional moments are curiously absent.
Movie Content: 8/10

The print is presented in 1080p/AVC MPEG-4 with a 1.85:1 aspect ratio. The print looks very good throughout without any apparent issues. Colors are vibrant and carry pop which brings out the fine details. The detailed scenes stand out very well. Blacks are deep. I found the print to be crystal clear with no artifacts or print damage. The darker look and feel of the film looks great with the appropriate lighting making this timepiece film standout. Overall, this is a fairly impressive print.
Print Quality: 9/10

The audio is presented in DTS-HD MA lossless 5.1 mix. he audio takes advantage of the soundfield with the rears getting a good amount of usage. Special effects such as guns blazing sound very good. Dialogue is clean and clear through the center channel. This is a well balanced mix with no issues of having to raise or lower the volume.
Audio Quality: 9/10

All special features are available in high definition.

A truly compelling tale of non-glamorized primitive survival that is sure to touch a nerve, this is a somewhat hidden gem; and despite slow moments and weak romantic story arcs, it’s a superb addition to the military history genre. I highly recommend this film on Blu-ray as a rental first.
Overall Rating: 9/10