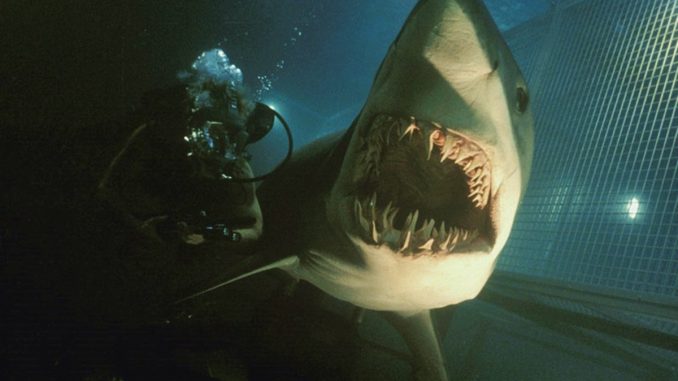 Welcome to Little Happy, a tiny man-made island in the Mozambique Channel that’s home to a flourishing nursery of marine life, where Great Whites come to mate and give birth every year. This peaceful conservatory is overseen by Emma Collins and her team of environmentalists, determined to continue her late father’s legacy. This idyllic existence comes to an abrupt end, however, when Emma’s ex-boyfriend arrives on the hunt for three bull sharks accused of butchering a half-dozen people. Their mother Bella was genetically engineered to be smarter and far more destructive. As the body count rises it becomes clear that Bella’s offspring have inherited her enhancements, and if free to mate, will mark the end of life as we know it. Dive in for the deadliest, bloodiest return to the deep blue sea yet!. 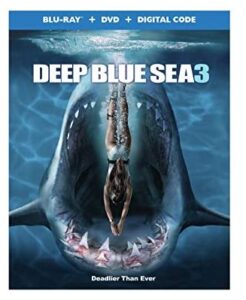 Working on a remote research facility, a scientist and her team researching the effects of climate change on local sharks are approached by an old friend to help him track sharks that have gotten loose, but when they learn the true nature of his visit are forced to battle several dangerous threats to get away alive.

One of the strongest features here is the fine setup that provides a fun through line for what happens here. The early series of exploratory measures around the facility showing their research into sharks and the community they have together is nicely off-set by the sudden arrival of the hunters looking around for the missing creatures serves to introduce the two groups rather well. Realizing the differences in their approach creates an intriguing story line where everything is worked out early on to not only know who they are but weaves the rest of the franchise together. As well, there’s a lot to like here with the realization about the threat posed by the sharks. The initial underwater sequence where the discovery of the dead sharks and the spectacular reveal about the deceased crew member gives us quite a nice sequence, while the hunting sequence later on where they manage to capture the one shark to begin studying it offers several fun action scenes showing off the danger posed to them by the sharks. Several other fun scenes, from the sharks attacking the ship to retrieve the captured shark, the spectacular shot of the shark jumping out of the water to grab a victim jumping from a ship into the water or leaping out of the water to grab another victim brawling on the shore makes for a series of fun attack scenes.

The print is presented in 1080p/AVC MPEG-4 with a 2.40:1 aspect ratio. “Deep Blue Sea 3” is a very beautiful looking film on Blu-ray and will really show off your home theater making you proud to own the Blu-ray format. “Deep Blue Sea 3” really brings the mirkyness of the ocean to life while sitting in your living room. The color palette really pops off the screen, and never disappoints one bit. Black levels provide some excellent depth. Scenes up close and when the camera pans away show provide stunning details. This film’s image is meant to represent a comic book as the audio commentary indicates.
Print Quality: 9/10

The audio is presented in a DTS HD-MA 5.1 mix. “Deep Blue Sea 3” will shake the walls off the foundation of your house the soundfield is so aggressive when the shark is on the screen. The soundfield is immersive at all times no matter if it is the special effects or dialogue. I was literally amazed with the amount of action panning from each speaker in the rears. It sounded as if there were all kinds of objects ricocheting off of the walls in the room. Bass was punchy as it shows with the amount of gunfire and explosions. Dialogue is also well placed in the center channel sounding crisp and clear.

The environment is great, the characters are above average, acting isn’t particular good but is enough to carry the story and plot. I think this is an enjoyable movie and has quite a lot intense moment.