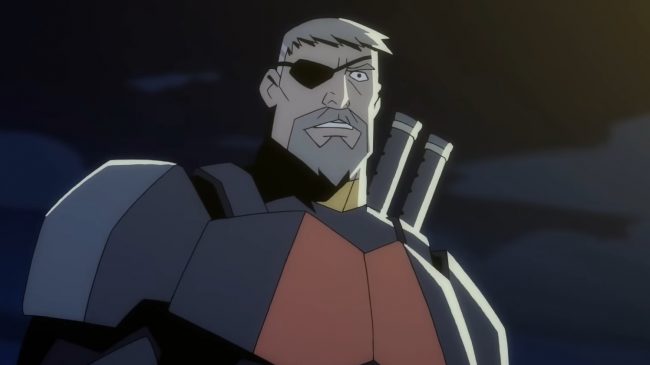 Ten years ago, Slade Wilson – aka the super-assassin called Deathstroke – made a tragic mistake and his wife and son paid a terrible price. Now, a decade later, Wilson’s family is threatened once again by the murderous Jackal and the terrorists of H.I.V.E. Can Deathstroke atone for the sins of the past – or will his family pay the ultimate price? 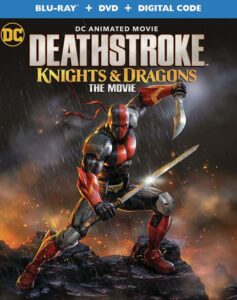 Slade Wilson is a injured American soldier who volunteers to be part of testing army’s own super-soldier formula. It doesn’t seem to work at first, and Slade then separates himself from his lover, Gen. Addie Kane. While he takes his leave from the armed forces, Slade has a brief affair, as well as realizing the experiments had a delayed reaction where he now has enhanced strength, speed, and reflexes, as well as a powerful healing factor. Thus, Slade adopts the identity of “Deathstroke” as a hired mercenary, while keeping his career secret from Addie, who he marries and has a son named Joseph. Deathstroke is eventually tagged by a terrorist group known as HIVE, who send their main agent Jackal to kidnap Joseph and add Slade to their ranks. Joseph gets rescued, but at the cost of his vocal chords, as Deathstroke seemingly kills Jackal. Time jump a decade later where Slade is divorced from Addie, and became a full-time merc. HIVE however is reforming under the leadership of a mysterious new queen, and has Joseph kidnapped again as the mute teen has psychic powers which the terrorists’ plan to exploit in the plans for world domination. Slade teams up with Addie and his ex-partner Wintergreen to stop the HIVE, and their commander who turns out to be Deathstroke’s daughter Rose he never knew existed who has all of her father’s abilities. Rose is really working for the revived Jackal, who was an original character made up specifically for this movie.

The print is presented in 1080p/AVC MPEG-4 with a 1:85:1 aspect ratio. ‘Deathstroke’ is rather impressive animation on Blu-ray. This is a very colorful film that is vibrant and pops. With a strong color palette, it brings out the fine details. The animation is rather impressive. Black colors are deep looking. Taking all these strong elements, they produce one sharp looking picture. We have an almost 3D look with the film.
Print Quality: 9.5/10

The audio is presented in a DTS-HD Master Audio 5.1 mix. The sound is rather impressive here and this I wasn’t even expecting going in. It takes advantage of the soundfield with the rears actually getting a good workout with the soundtrack and effects. The sound from the fight scenes is also well done. Dialogue is well placed through the center channel with voices being so ever clear..
Audio Quality: 9.5/10

It’s not a long movie, however I think it’s just about right amount of time for the story that’s being told. Overall, I thought the movie was great with only a couple nitpicks. I’d recommend this for any superhero movie fan. If you’ve been waiting as long as most fans have for Deathstroke to finally get his own movie, then this will tide you over until they give him the eventual live-action film.
Overall Rating: 8/10