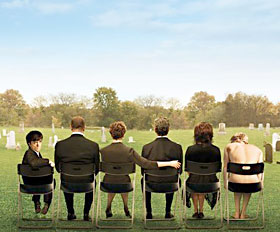 Though it doesn’t hit the same comic heights as Bowfinger, Death at a Funeral is a fun little romp. Granted, not all of the characters are meant to be humorous, like Daniel (Matthew Macfadyen, Pride & Prejudice) and his wife, Jane (Keeley Hawes, Tristram Shandy), straight-faced foils for the more over-the-top performers. After Daniel’s father passes away, the couple offers to host the funeral, so all his relatives descend on the family abode, including Daniel’s estranged brother, Robert (Rupert Graves, V for Vendetta). The mood is already tense when their cousin, Martha (Daisy Donovan), arrives with her nervous fiancé, Simon (Alan Tudyk, Serenity). On the way over, Simon takes a Valium that’s actually a hallucinogenic concoction cooked up by Martha’s pharmacology student brother. By the time they arrive, Simon’s inhibitions are gone with the wind. Other guests include Uncle Alfie (Peter Vaughn) and an uninvited American mourner (Peter Dinklage). By the end of the movie, one of these individuals will be dead. Though he’s worked in the States for several decades, director Frank Oz was born in the UK, and Death at a Funeral feels like the work of a British filmmaker. As drawing room comedies go, it may not rival Arsenic and Old Lace, but it’s still funnier than most. If the film has a flaw, it’s one misjudged moment of scatological humor, which is sure to induce more cringes than giggles. Fortunately, it’s over quickly, and Tudyk’s hilarious performance provides ample compensation. 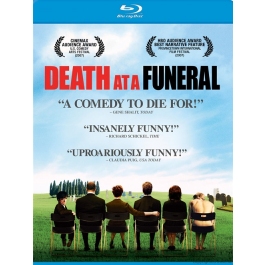 The original “Death at a Funeral” was directed by Frank Oz and written by Dean Craig. This story has the feel of a great play where an ensemble cast of ridiculous Brits try to make the best of a bad situation at their patriarch’s funeral when many things go awry and a midget attempts to blackmail them.

This is a zany farce for certain. There are many familiar British faces and the situations just go from bad to worse and from worse to horrifyingly funny. A comedy of manners combined with pure slapstick in a funeral that seems unable to be completed between fighting and public nudity and mixed up corpses. There’s a great build in exposition in the first act, an increase in action in the second, and then all out looney by the third with nice closure. It really reminds me of a great ensemble farce play like “Noises Off” that was made into a movie in 1992 featuring Michael Caine, Carol Burnett, and Christopher Reeve (but I recommend seeing that live if you can because it’s a lot funnier that way).

The best stand-out performance is by Alan Tudyk whom you might remember as the pirate in “Dodgeball” and he plays Simon. His English accent is wonderful, so convincing that I didn’t know he was actually American till I listened to the commentary. His character is trying really hard to impress his girlfriend’s father and is so nervous going to this funeral that he takes Valium to calm down.

Unfortunately, it is not Valium but a hallucinogenic drug and he spends the entire day getting progressively more spaced out and behaving ridiculously until he ends up naked on the roof! His facial expressions are so well done that you can almost imagine what his character is seeing when he is staring at the widow’s hat. He does lots of great little bits ranging from subtle to very intense and it sells the situation really well.A pure delight with lots of laughs and a bit of heart and I highly recommend seeing it before the remake version because from what I’ve seen of the trailer, they are using the same jokes almost word for word with an urban flair and if it doesn’t work out well, I’d rather you see this one to begin with.
Movie Quality: 10/10

The print is presented in 1080p/AVC MPEG-4 with a 1:85:1 aspect ratio. Visually ‘Death at a Funeral’ is not going to win any awards for the best looking film on Blu-ray. Colors have this muddy look to them, almost as if they are oozing off the screen. While this is not a huge issue, it does become an annoyance to a degree. Details aren’t also the greatest lacking definition. The lack of depth at times does hurt the film from taking advantage of the Blu-ray format. Skin tones are natural looking albeit the lack in definition. This is an obvious upgrade over the DVD, but not by a lot.
Print Quality: 6/10

The audio is presented in a DTS-HD Master Audio 5.1 mix. This is another audio presentation which lacks overall depth and is a front heavy experience for the most part. The rears do get a little bit of use, but not as much as I would expect. Dialogue comes through the center channel very clear and crisp. The audio is a bit better than I expected when compared to the video quality.
Print Quality: 7/10

Scriptwriter, Dean Craig, has cleverly woven character threads together to create hilarious and absurd juxtapositions in “Death at a Funeral”. The cast is a strong group of actors who pull off the comedy brilliantly, with Matthew Macfadyen’s straight-faced character the focal point and glue that holds it all together. What a gem! You’ll want to watch it more than once.
Overall Rating: 6/10