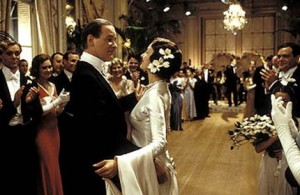 It’s astonishing that one man could have written so many memorable songs, but musical gems keep popping up in De-Lovely, about the life and loves of Cole Porter. Played by Kevin Kline (In & Out, A Fish Called Wanda), an elderly Porter is summoned by a mysterious director (Jonathan Pryce, Brazil) to view his own story, which unfolds as a series of theatrical tableaux. The movie is open (if a bit chaste) about Porter’s homosexuality, but argues that the love of his life was still his devoted platonic relationship with Linda Lee (Ashley Judd, Ruby in Paradise, Kiss the Girls). Unfortunately, the narrative suffers from the fate of many biographies; by trying to cram in a person’s entire life, it ends up a collection of snapshots without depth or context. The parade of celebrity singers (Alanis Morissette, Sheryl Crow) were apparently chosen for their jarringly modern vocal mannerisms. 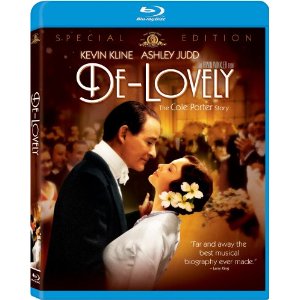 At one point Jay Cocks’ script borders on the self-congratulatory when Cole and Linda are shown viewing the earlier biopic starring Cary Grant with obvious displeasure. This remake, of course, is going to tell it like it is, and indeed the script of “De-Lovely” strains to account for the (frequently) flawed face of artistic genius. Linda tells Cole that his music stems from his talent, not his behavior, whereas Cole tries to explain that it’s all part of the same inseparable package: without the excesses, the disloyalties, the self-indulgences he wouldn’t be who he is–arguably America’s greatest songwriter. In the end, “De-Lovely” is self-descriptive: not a pretty picture–more Asbury Park than Granada, to paraphrase a Porter lyric.

Perhaps today’s audiences need more proof that he really was a great songwriter. Or given the moral correctness of our times, perhaps audiences are incapable of empathizing with those given to self-indulgences. Or they may think they know all too well “the wages of sin.” Or perhaps the acting of Kline and Judd overwhelms the script’s good intentions. Indeed, they come across as two people who, as each is fully aware, ask too much of one another. He gives her gifts, love, sporadic devotion; she gives him gifts, his vanity (i.e., useless legs), and undying devotion. In the end, and in the still of the night, Linda’s devotion cuts through the darkness–a flickering memory but all that Cole has left before the screen goes black.

We believe the characters, their relationship, and their deep if unconventional love–perhaps too much. The film becomes a frequently luminous and tuneful soap opera about a main character who is more pathetic than tragic, about a self-destructive songwriter who self-destructs for obvious reasons, but in a deliberate, slow, very sad and depressing manner. Orson Welles had in essence a similar character and plot framework in “Citizen Kane,” but he also had the directing “style” (which above all should be foremost in anything related to Cole Porter’s music and life) and a “motivator” to make Kane’s willful and self-ignorant destruction a mutually shared obsession, inviting us at every moment to become adventurer-detectives searching for the clues that will lead us to “Rosebud.”

By contrast, “De-Lovely” wallows in pain and misery for the last 30 minutes, insulting us with a momentary deus ex machina (“Blow, Gabriel, Blow”–the clumsy choreography and camera work are exceeded only by the execrable, cheesy musical arrangement), and then attempting to rescue everything with that flickering, potentially powerful, image that is the film’s final moment. Too little, too late–and too soon, moreover, after we’ve endured the spectacle of our subject reduced to a pay-for-play “John,” a victim of blackmail (triply so, because Linda is included, as is their relationship and mutual trust).
Movie Quality: 9.5/10

The print is presented in 1080p/AVC MPEG-4 with a 2:35:1 aspect ratio. I was rather surprised with the look of the film on Blu-ray that it looked so good. The film is very colorful throughout. Colors are vibrant carrying a more natural color palette. Blacks are also very strong and deep. With strong colors and deep blacks, it brings out the fine details. Details are very good. Fleshtones also look very natural. The print is as clean as a whistle with a very pristine look. There is some grain, but nothing distracting. Fans of the film will not be disappointed at all.
Print Quality: 7.5/10

The audio is presented in a DTS-HD MA l0ssless 5.1 mix. This lossless 5.1 mix is even better and one of those films where the soundtrack takes advantage of the upgraded audio. Bass is punchy and full here. Dialogue is clean and crisp sounding through the center channel without any issues. This audio mix is brought to life and makes you feel like a part of the experience how well the rears fill out the soundfield.
Print Quality: 9/10

George Stevens clearly made this film from his heart, and despite its many flaws it deserves viewing for its reverent and straightforward approach. Its slow pace will probably turn off many viewers, but it remains one of the few Bible epics that is not campy or over-the-top, so for that reason it is a bit more legitimate as a true Bible film, as opposed to other epic spectacles such as Ben-Hur or Ten Commandments, which though entertaining, are full of Hollywood glamour and melodrama.
Overall Rating: 8/10