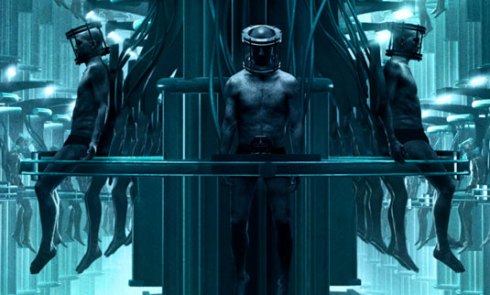 Two-time Academy Award® nominee Ethan Hawke plays Edward Dalton, a researcher in the year 2019, when an unknown plague has transformed the world’s population into vampires. As the human population nears extinction, vampires must capture and farm every remaining human, or find a blood substitute before time runs out. However, a covert group of vampires makes a remarkable discovery, one which has the power to save the human race. 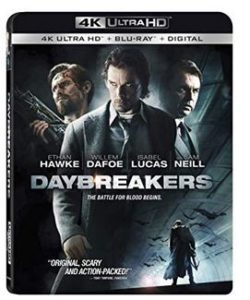 The year is 2019. Vampires make up most of the world’s population, humanity having been transformed after from an epidemic that started ten years earlier. Any remaining humans are hunted and, if caught, are taken to corporations that harvest their blood. These corporations need all the help they can get; because so few humans are left, blood is in short supply, and when a vampire has no access to human blood, they mutate into violent winged beasts with virtually no mental capabilities. Pharmaceutical companies, like the one run by Charles Bromley (Sam Neill), have been trying to develop a synthetic blood substitute with little to no success. Bromley’s chief hematologist, Edward Dalton (Ethan Hawke), is well aware that if humans go extinct, vampires will suffer the same fate. It’s not about creating a substitute – it’s about finding a cure.

Before long, Edward meets Audrey (Claudia Karvan), a surviving human and the leader of a resistance movement dedicated to finding that elusive vampire cure. Success depends on Edward, who in turn depends on a wisecracking, car-loving group member named Lionel Cormac, a.k.a. Elvis (Willem Defoe). Why he depends on him, I leave to you to find out. Let it suffice to say that Elvis knows a thing or two about vampires. Anyway, this resistance is mostly human, but a few non-humans are also taking part, and I find this fascinating.

Subplots involving Edward’s brother, Frankie (Michael Dorman), and Bromley’s still-human daughter, Alison (Isabel Lucas), add some emotional weight. Frankie in particular is a complex character, torn between his life as a vampire soldier and his love for Edward, which probably hasn’t been expressed in quite some time. Convention requires that Frankie remains angry and distant until right before the end of the film, at which point he finally shows his true feelings for his brother. Yes, convention requires, but it works just the same. As for Alison, she isn’t given as much screen time, although I think we learn everything we need to know, especially during those tense couple of scenes involving her father. Indeed, it is an experience having a conversation with him; everything about him suggests deceit and menace, from his perpetually sinister tone of voice to his piercing eyes, which you’d swear could turn you to stone.

When it comes to supporting players, the real disappointment is Audrey. While certainly not a bad character, she is an unnecessary one, adding so little to the story that it seems she was included only out of necessity for a sidekick. Surely you know that all movies like this have sidekicks. Elvis is a little better, but not much; his jokey dialogue is unbelievably bad, and it’s made worse by an exaggerated Southern accent that does little more than reinforce a stereotype. It’s a good thing this character is vital to the plot. Otherwise, I suspect he’d get tiresome much earlier on, like during his first scene.

To be fair, most of the movie works just fine. Hawke and Neill give decent performances – about as decent as a vampire film will let them be, anyway. I also enjoyed the visuals; in this future world, vampires have been clever to develop high tech methods of avoiding exposure to the sun, such as underground walkways and cars equipped with UV-blocking panels (they have to rely on projected camera images to see the road). In the absence of sunlight, their world is a drab, muted landscape of blue and gray tones.
Movie Content: 8.5/10

The print is presented in 2160p/MPEG-4 with a 2.35:1 aspect ratio. I was very impressed with this print on Blu-ray and even more so on 4K UltraHD having owned the previous release, I felt like Lions Gate did a fantastic job presenting this film in high definition. Colors are not the strong point in this print as the world is intentionally made to look very dark and drabby due to the nature of the film. There are certain colors that due stand out, and when they do, they carry a nice pop to them. Black levels are inky and very strong throughout the film. This is an area where the film shines due to the dark nature helping give it atmosphere. Details are also excellent with facial pores being so evident and then add the vampires eyes looking colorful in a darker looking film.
Video Quality: 9.5/10

The audio is presented in Dolby Atmos; Dolby TrueHD 7.1 mix mix. Lionsgate churns out yet another impressive audio mix on 4K UHD, taking advantage of the film’s sound design. I was immersed at all time throughout no matter if it was special effects or dialogue. The depth of the dialogue is well done through the center channel sounding very clear and crisp. The action sequences sound nice and expansive in the sound field with plenty of bullets whizzing around, car chase sequences, and the vampires hissing when attacking. Then add the special effects when someone gets bitten or torn apart adding to the soundfield.
Audio Quality: 9.5/10

“Daybreakers” is a good action adventure horror film that takes a complete twist on the vampire genre. If you are a fan of action films and enjoy vampires, this is a film that you will want to check out. On 4K UHD this is a very impressive package with stellar audio and video mix that are close to demo reference.
Overall Rating: 8/10