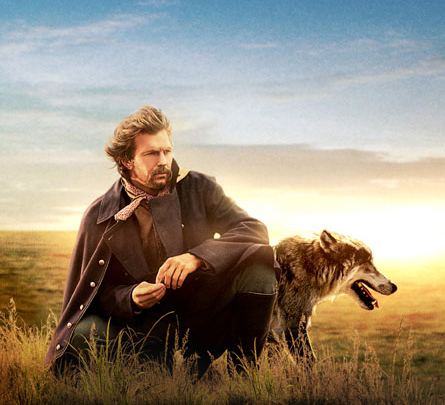 Kevin Costner’s 1990 epic won a bundle of Oscars for a moving, engrossing story of a white soldier (Costner) who singlehandedly mans a post in the 1870 Dakotas, and becomes a part of the Lakota Sioux community who live nearby. The film may not be a masterpiece, but it is far more than the sum of good intentions. The characters are strong, the development of relationships is both ambitious and careful, the love story between Costner and Mary McDonnell’s character is captivating. Only the third-act portrait of white intruders as morons feels overbearing, but even that leads to a terribly moving conclusion. Costner’s direction is assured, the balance of action and intimacy is perfect–what more could anyone want outside of an unqualified masterpiece? 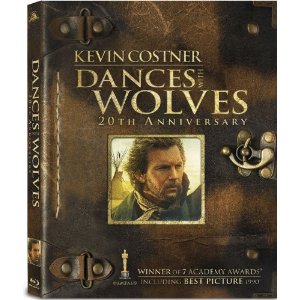 Audio: Dolby Digital 5.1 mix
Aspect Ratio: 2.35:1
Disc Spec: 1 BD/1 DVD
Region: 1
“Dances With Wolves” is a real period piece – by which I mean that it depicts the way Americans were ready to view the “taming” of the West from the vantage of the late 20th century. The film’s whites are often drunk, depraved, pointlessly violent and prodigiously wasteful. The Sioux are tough, but also intelligent, loving, resourceful and brave. That this revisionist view of history is not entirely accurate is beside the point. After decades portaying Native Americans as crazed, dirty and brutal, a sympathetic depiction of the continent’s first inhabitants was long overdue. It’s a measure of the degree to which the pendulum is swinging the other way that 20 years later, such sentimental views come across as cloying and naive. Even this film shows the tribe as a macho patriarchy where women are second class citizens

Still, the film’s characters were strong and memorable. Stands With A Fist (a stunning the Mary McDonnell), taken into the tribe after a raid wiped out her family is the tribe’s only white, and an obvious choice as a love interest for Dunbar. McDonnell’s expertly depicted the difficulty of learning to speak a language that she hadn’t spoken or heard for decades. Kicking Bird (Graham Greene) is Costner’s mentor and protector and initiator into the ways of the Indians. Wind in his Hair is a tough fighter constantly tests and eventually befriends Dunbar. Ironically, only Costner’s Dunbar seems bland and uninteresting in the midst of this wonderful cast. I couldn’t help but to wonder whether Costner got an ego boost from playing the only white man in America whom the Sioux considered human.

My main beef with “Dances With Wolves”, now as in 1990, was the lame ending. Costner the director can’t ignore the historical fact that these noble people were virtually exterminated shortly after the events depicted in the movie. The narrative arc that Costner follows – Dunbar’s psychic voyage from meaningless carnage to harmonious unity — thus collides with the reality that American history took another path. An explanatory graphic at the end lamely brings the movie to a close, interrupting the action inexplicably and leaving every story unfinished.

Nevertheless, “Dances With Wolves” is a classic film, beautifully conceived, shot and acted. The fact that the actors who played the Sioux delivered their lines in Lakota both showed the film’s respect for their culture and viewers understand the foreigness of the first encounters with them. Well worth a look, even as we reach for a more nuanced and balanced look at the colonization of the Americas.
Movie Quality: 9.5/10

The print is presented in 1080p/AVC MPEG-4 with a 2:35:1 aspect ratio. Having owned previous incarnations of the DVD release, especially the original 1998 DVD release, one thing I have noticed on Blu-ray is how vibrant the colors look on Blu-ray. From the golden weeds and grass that surround the area and the blue skies up above, You can literally see the shading and detail of those long strands of grass and when it comes to showcasing the Fort or even the Indian camp and seeing the animal hide on the clothing to the tents, there is quite a bit of detail that can be seen.Blacks are nice and deep, there is a fine layer of grain.
Print Quality: 9/10

The audio is presented in a DTS-HD MA lossless 5.1 mix. As the majority of the film features dialogue, when there’s action…may it be horses riding in the distance, the buffalo trampling and skidding on the ground, the rifle shots, the lossless soundtrack does a good job in making those scenes quite immersive by utilizing every channel. Even in non-action scenes, a good number of ambiance of how things sound outdoors. So, bugs, birds, dogs, horses, everything can be heard all around you.
Print Quality: 9/10

This is a powerful movie even after several years. I love how “Dances with Wolves” begins with an intimate portrait of the American West, from the vast plains to the charismatic wolf “Two-Socks”. The film follows Kevin Costner’s emotional but nuanced journey from disillusioned Army officer to Sioux patriot. The acting is superb all around and highly recommend for fans of the film.
Overall Rating: 9/10