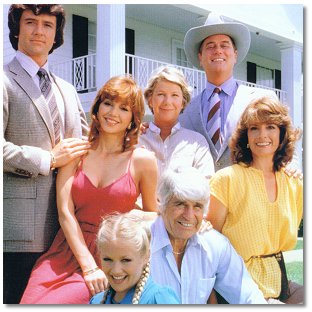 In its 14th and final season, Dallas goes out in a gusher of murders and kidnappings, lies and blackmail, seductions and schemes. J.R., Bobby and Cliff – three original characters so big only Big D could hold ’em – are at the heart of the action, surrounded by oil-country folks who joined the series over the years and a passel of dynamic newcomers. And of course there’s that Dallas hallmark, a white-knuckle cliffhanger. This time it’s a two-part finale inspired by It’s a Wonderful Life in which J.R.’s guardian from the great beyond shows the Lone Star State’s meanest rattler what the world would have been without him. Think everything’s for the better? Then you’re in for some surprises! 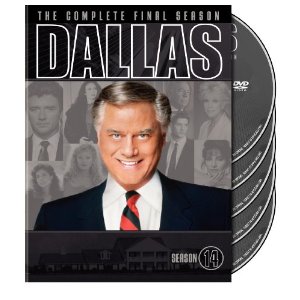 “Dallas” garnered a large fan base over the years. It’s been an absolute joy to collect all of the season sets over the past 6 years, which brings me to why I feel the need to air a grievance. The character of Cliff Barnes has been a mainstay of this series since the very first episode in 1978; I’m sure that other die-hard fans are also aware that Ken Kercheval (Cliff) and Larry Hagman (J.R.) were the ONLY two actors to have remained with the show from start to finish.

Keeping this in mind, I must say that I’ve been highly offended by the omission of Cliff’s picture on the front cover art of the last 3 season sets. It wasn’t as if Cliff was a peripheral, secondary character: his conflict with the Ewing family (J.R. in particular) was to me the principal driving force which kept this series so incredibly successful for so many years. How on earth could the designers of these last 3 box sets continually ignore such an integral presence on the show? I bit my tongue and kept quiet when seasons 12 & 13 were released, but seeing the cover art on season 14 is the last straw for me, an offense which I cannot ignore.

I fully agree with the inclusion of Bobby and Carter McKay, along with big-name guest stars Susan Lucci and Barbara Eden, who added some spice and intrigue to this final year (and who were both involved in major story lines). But then you have a character who is almost universally reviled by fans (James), another who is virtually unknown (Jory), one who was unfortunately killed off very early in the season (April), as well as another dead character who returned only for the series finale (Kristin). C’mon now, I understand not having Clayton on the cover, as he only made 4 appearances during this final year (although it would’ve been nice to see him here as well, being the important legacy character that he was), but there is absolutely NO excuse for Cliff’s absence. Bottom line is he needs to be here, and in a picture at least as big as Bobby’s.

And so it ends, although there were of course two reunion sequels, one better than the other. This year was the last one for Dallas, and the cast departures for budget cuts translating to decreased ratings obviously reached it’s breaking point. This season saw many players gone or with a reduced episode count, and the result was of course those viewers who were fans leaving.
Overall Rating: 8/10