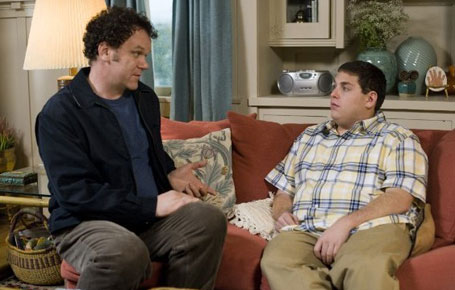 Mumblecore auteurs the Duplass brothers (Baghead, The Puffy Chair) dip their toes in the precarious waters of Hollywood by casting well-known actors in Cyrus. But their devotion to clumsy, uncomfortable people remains: John (John C. Reilly, Step Brothers) has barely left his apartment in the seven years since Jamie (Catherine Keener, Lovely & Amazing) divorced him, so Jamie demands he come to a party–where, miraculously, he meets Molly (Marisa Tomei, The Wrestler), who seems like the woman of his dreams. Unfortunately, Molly comes with some baggage: her 22-year-old son, Cyrus (Jonah Hill, Superbad). To say Molly and Cyrus are close is an understatement, and John finds himself in a battle of wills with Molly as the prize. The Duplass brothers seek a kind of cinematic simplicity–to call it purity would be too highbrow for these aggressively pedestrian filmmakers–and when it works, it brings the viewer in intimate contact with life in its ordinary, essential glory. When it doesn’t work, it’s just dull. Despite its flatfooted plot, Cyrus works pretty well. The higher caliber of the cast helps–Reilly, Tomei, Hill, and Keener are all excellent, and much of the movie is genuinely funny. Don’t expect elegance, but sometimes, something plain can please. 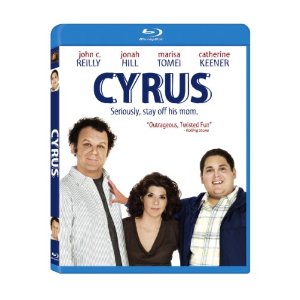 This is Jay and Mark Duplass’ first studio comedy, but aside the talent they’ve amassed, it’s hardly recognizable as a studio picture. That’s to its credit, of course. It’s the best performance that Jonah Hill has ever given, and maybe the funniest, though there’s not one joke in Cyrus. John C. Reilly’s desperation is a little too painful and awkward to watch in the beginning, but it ultimately works — Molly feeds off that dependence and it’s the only logical explanation for how she’s end up with him, given her relationship with Cyrus. Marisa Tomei, aged but as gorgeous as ever, is magnificent, holding the dynamics of both relationships together, perfectly toeing the line between honest affection and creepiness. It pushes up against the line, but it never really crosses it. It’s dysfunction rather than deviancy.

Cyrus is the perfect indie execution of a studio high-concept. I was troubled by that concept initially; the Duplasses find the honesty in the relationship triangle, but I had some difficulties with the honesty of the setup: What were the Duplass Brothers trying to say about the over-affection between mothers and their sons? Does a dynamic like the one between Molly and Cyrus really exist in the world, outside of hillbilly trailer homes or that episode of “The X-Files”?

But that’s not the dynamic the Duplasses were really trying to explore, it’s just the studio hook. The more honest dynamic is one that so many of us have faced: step-fathers honing in on the existing bond between a single-mother and her children. In that context, Cyrus feels genuine. His behavior is typical of those relationships; it’s just that the son is usually 11 instead of 22. But it is a delicate situation for any new partner, who has to win the affection of the mom without alienating the son, an alienation that could ultimately doom the relationship. In the end, that premise backs the Duplass Brothers into a corner I never thought they could extract themselves from, but they eventually drive it toward the most honest ending for which you could possibly hope.
Movie Content: 8/10

The print is presented in 1080p/MPEG-4 with a 2.40:1 aspect ratio. Colors are deep and well saturated throughout the entire presentation. Blacks are strong and almost inky at times. Nowhere did the image ever appear soft with such strong colors and black levels. Flesh tones were also natural. The film carries a very clean look throughout which some might enjoy, while others might not be too happy with.
Video Quality: 9/10

The audio mix is presented in DTS HD 5.1 Master Audio lossless track. “Cyrus” is a dialogue-driven film that is mostly front and center channel driven. There really wasn’t anything that stood out, audio-wise especially for the surround channels. If anything, it’s all about the dialogue and the dialogue on the lossless soundtrack is crystal clear. I detected no hiss or any audio problems while watching the film.
Audio Quality: 8/10

In the end, your enjoyment of “Cyrus” will mostly equal your enjoyment of the 3 starring performances. Plot specifics won’t stick with you for long. There are few lines that stick to the memory. For me, even though I really like Reilly, Tomei & Keener…there just wasn’t quite enough substance to make me whole-heartedly embrace the film.
Overall Rating: 7/10