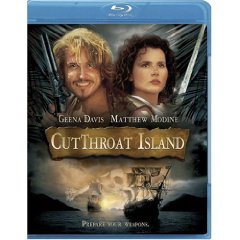 Director Renny Harlin’s high-seas adventure has some good things going for it: Geena Davis makes a swashbucklingly alluring pirate, and the megabudget provides huge explosions. But this plot-heavy rollick is as badly constructed and overwhelmingly inflated as Spielberg’s “Hook.” Harlin’s earlier films, “Die Hard 2” and “Cliffhanger,” had their fair share of muscular action, and he doesn’t disappoint here: his winds blow and his seas roil. Matthew Modine, though-with whom Davis is teamed in a race for hidden treasure-is less than inspired. The movie gamely attempts to capture the fire of the old Errol Flynn pictures, but it’s harsh and imposing, and there’s no romance to it.

Cutthroat Island may not be the best movie ever made, but I really feel that it was judged too harshly. Cutthroat Island is not a great movie by any means. But it is a lot of fun if you enjoy pirate treasure, sea battles, sword fighting, a great soundtrack, and wonderful period costumes. The script is pretty weak and much of the acting is wooden. Worse yet, it seems that no one learned anything from Errol Flynn’s The Sea Hawk because they once again include a rather annoying monkey as comedy relief. But what they do right is what makes this movie worth watching. The film wonderfully recreates the 17th century Caribbean world of the pirates and is probably the most realistic looking realization of this time and place to date. The actual portrayal of the pirates themselves owes more to “Treasure Island” and “Peter Pan” than “The American Sea Rovers”, but there is definately something compelling in the romantic myth of the golden age of piracy. The pirate movie has suffered in recent years and Cutthroat will probably do nothing to revive it, which is really a shame as they, like the western and sci-fi adventure, are the best incarnations of modern myth to be found today.

The story revolves around the quest of Captain Morgan Adams, the sexy yet honorable pirate queen, to avenge her father’s murder and outwit her evil pirate nemesis and fratricidal uncle, Captain “Dawg” (who makes these names up?). Taking command of her late father’s ship and now in possession of part of a map to locate her father’s lost treasure, Morgan sets out to win the vast riches for her and her hardy crew. On the way she engages the services of the roguish “Doctor” Shaw, manages to obtain the remaining pieces of the map, then goes on to brave mutinies, betrayals, storms at sea, exploding cannonballs, bad dialogue, and cliched bad guys in a worthwhle romp through an era gone by, when men and women sailed tall wooden ships, killed many people for profit, and drank themselves into oblivion on the high seas. .
Movie Quality: 7/10

The print is presented in 1080p/AVC MPEG-4 with a 2.35:1 aspect ratio. Lionsgate churns out yet another great looking catalog title. I was rather surprised to find the print free from any artifacts or dirt specs that plagued the DVD. Colors are vibrant and pop due to the expansive amount of colors used in the film. Blacks are deep. Fleshtones are one area that I was disappointed in as they had a waxy orange look to them, but it was not any EE or DNR applied. Grain is present throughout the entire print, but it is very light.
Video Quality: 9/10

The audio is presented in DTS-HD MA lossless 7.1 mix. If I was surprised by the video, the audio mix brings it up a notch and a lot of that has to do with the score by John Debney. It is a very riveting score fitting the source material. With an excellent score, also add some engaging battle sequences that made you feel like a part of the action riding those rough waters. The viewer is immersed in the soundfield at all times. Dialogue was clear and crisp through the center channel with no apparent problems.
Audio Quality: 9/10

This Blu-ray is on the light side of special features, but the commentary by Renny Harlin is interesting as I have always enjoyed most of his films and listening to his thoughts.

‘Cutthroat Island’ is an enjoyable film that will entertain from start to finish and of course, its a Renny Harlin film, you either like or hate him as a director. The video and audio was rather surprising for this catalog title as Lionsgate churns out yet another winner. Special features are on the lighter side which is disappointing. Fans of ‘Cutthroat Island’ you can retire the DVD and add this Blu-ray to your collection.
Overall Rating: 9.5/10