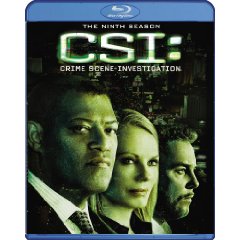 CSI follows the mysterious (and sometimes wacky) cases of the Crime Scene Investigation unit in Las Vegas. The key aspects of CSI are the fascinating forensic and logical deduction techniques that the team uses to track down killers. It’s the traditional whodunit concept, but with a high-tech twist.

Season nine opens with Warrick Brown’s (Gary Dourdan) funeral. Sara (Jorja Fox) returns to the team, and she and Grissom (William Peterson) have several awkward moments before Sara realizes that she can not remain in Vegas. Over the next few episodes, Grissom’s mood takes a depressive downturn — is it because of Sara’s leaving, Warrick’s death, or the change he finds in Lady Heather? Grissom eventually leaves to find Sara, leaving behind more questions than answers.

Two new CSIs come in. Riley Adams, a smart-mouth woman with some experience, flirts with Greg but doesn’t add much more. We get Ray Langston coming in as a new CSI, level 1. And within a few weeks, CSI, as we’ve known and loved for years, changes to The Ray Langston Show. He’s the center of every episode, except one. He knows all, sees all, can do it all–he’s the star now.

The regular cast seems to disappear. Greg has few lines, Catherine melts into a background ghost, Riley becomes a wall, and Nick passes thru the episodes as a shadow. What happened?? Did Petersen leave and take all the writers with him?
Movie Quality: 9/10

The print is presented in 1080p/VC-1 with a 2.35:1 aspect ratio. ‘CSI’ holds a rather soft image throughout with a warmer color palette. Details aren’t lacking at all, offering a very detailed image throughout each episode.  Blacks are solid throughout the print. Fans of the show will be happy, while those that only view an episode every so often may find this transfer a bit on the not so great side. There is a problem as things can’t be perfect, with various artifacts appearing throughout each episode. This can be quite distracting at times which can hurt what could have been a great image.
Video Quality: 8/10

The audio is presented in DTS-HD MA lossless 7.1 mix. The films special effects really takes advantage of the soundfield immersing the viewer. The rears get a fairly good work out with a dynamic sounding experience. I couldn’t believe how dynamic the sound effects and the soundtrack were across all surrounds. Dialogue is well balanced and very clean. The sound here totally makes up for the inconsistencies with the image.
Audio Quality: 9/10

To me this CSI is the best one on TV, with CSI Miami close behind. Grissom is the balm as well as Worrick and Nick. Grissom Shows great leadership skills and explains as he is going. If you are a fan of CSI, you will enjoy the ninth season on Blu-ray.
Overall Rating: 8/10