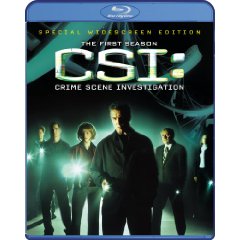 Murder, and its tale-telling aftermath, is the compelling subject of CSI: Crime Scene Investigation. Since it premiered on CBS on October 6, 2000, CSI was a ratings triumph, spawning a spinoff (CSI: Miami) and positioning itself for long-term success. As the first season demonstrates, creator Anthony Zuiker’s foolproof formula was established early on, bolstered by a fine ensemble cast and requiring minimal tweaking as the season progressed; its Las Vegas-based “criminalists” eventually became “CSI” steeped in the scientific minutiae of forensic investigation, but the series arrived essentially intact, with an irresistible (and seemingly inexhaustible) supply of corpses and the mysteries that surround them. Influenced by the graphic precedent of movies like Seven and Kiss the Girls, CSI matches morbidity with dispassionate methodology; viewers are so fascinated by the investigative process that they’re unfazed by intimate autopsies and internal (i.e., digitally animated) views of traumatized flesh, bone, and sinew.

While keeping abreast of cutting-edge technologies, CSI combines the ingenuity (and fallibility) of villains with the appealing humanity of its heroes. CSI director and entomologist Gil Grissom (played by series coproducer William Petersen) is introverted but ethically intense; he’s both mentor and moral compass for his night-shift team, including a former stripper-turned-CSI (Marg Helgenberger); a recovering gambler (Gary Dourdan); an eager ace (George Eads) with room for improvement; a workaholic (Jorja Fox) who can’t always remain emotionally detached from her cases; and a chief detective (Paul Guilfoyle) who’s a necessary link to police procedure. Like The X-Files, CSI supports its characters with feature-film production values, employing a Rashomon structure that turns murder into a progressively accurate study of cause and effect. Script quality is consistently high (“Blood Drops” and “Unfriendly Skies” are exceptional), direction is slick and sophisticated, and the mysteries are complex enough to invite multiple viewings. Despite a regrettable shortage of DVD features, CSI’s inaugural season remains addictively worthy of its lofty reputation.

There are a lot of television shows out there that deal with crime and crime-solving. None can even hold a candle to CSI due to the depth of the characters. This crime scene analyst team is unique in so many ways, yet they all have two things that drive them, their passion for solving crimes and the desire for having justice carried out. Each actor portrays their respective character with amazing reality, and each character is human and believable.

The writing of each episode is also great this first season. You have to experience CSI before you can truly understand how unique and intriging each story is. And you learn from this show!! How many TV shows these days can you say that about? Not many. I will attempt to explain some of my favorite episodes without spoiling the stories. “Friends & Lovers,” this episode made me cry. It hit close to home, and I really felt for the boy in the story. “Blood Drops” deals with a very touchy subject, and a grizzly outcome, but it was amazingly written, and the acting, superb! Episodes like this shock and amaze! “Unfriendly Skies” is the first episode of CSI that I saw, and it was so unique and interesting that it hooked me. Imagine the team solving a death on an airline, piecing together verbal accounts supported by the evidence, and then reenacting the death while on a jetliner. So unique!! “Too Tough To Die” puts Sara, probably my favorite character, into some serious light, and in a tough situation. “Who Are You?” shows that even the most brilliant of scientists can have virtually the whole story, but still arrest the wrong person.

This show is great and they do a great job with the cinematography. Most of the time I’m amazed that the scenery is so close, most TV shows and movies get it wrong. It shows how much effort they put into being authentic to the city, one of those little details that few notice, but is appreciated all the same.

The print is presented in 1080i with a VC-1 encode and a 1.78:1 aspect ratio. ‘CSI’ holds a rather soft image throughout with a warmer color palette. Details aren’t lacking at all, offering a very detailed image throughout each episode.  Blacks are solid throughout the print. Fans of the show will be happy, while those that only view an episode every so often may find this transfer a bit on the not so great side. There is a problem as things can’t be perfect, with various artifacts appearing throughout each episode. This can be quite distracting at times which can hurt what could have been a great image.
Print Quality: 7/10

The audio is presented in DTS-HD MA lossless 7.1 mix. The films special effects really takes advantage of the soundfield immersing the viewer. The rears get a fairly good work out with a dynamic sounding experience. I couldn’t believe how dynamic the sound effects and the soundtrack were across all surrounds. Dialogue is well balanced and very clean. The sound here totally makes up for the inconsistencies with the image.
Audio Quality: 9/10

This set on Blu-ray offers some exclusive content that is not found on the DVD release.

I have recommended ‘CSI’ to many people but usually tell them to rent the show first as it may not be for everyone. On Blu-ray, the film’s image quality hurts the presentation a tad, but the audio is where this disc shines. There are also special features that are exclusive to the Blu-ray format.
Overall Rating: 8.5/10