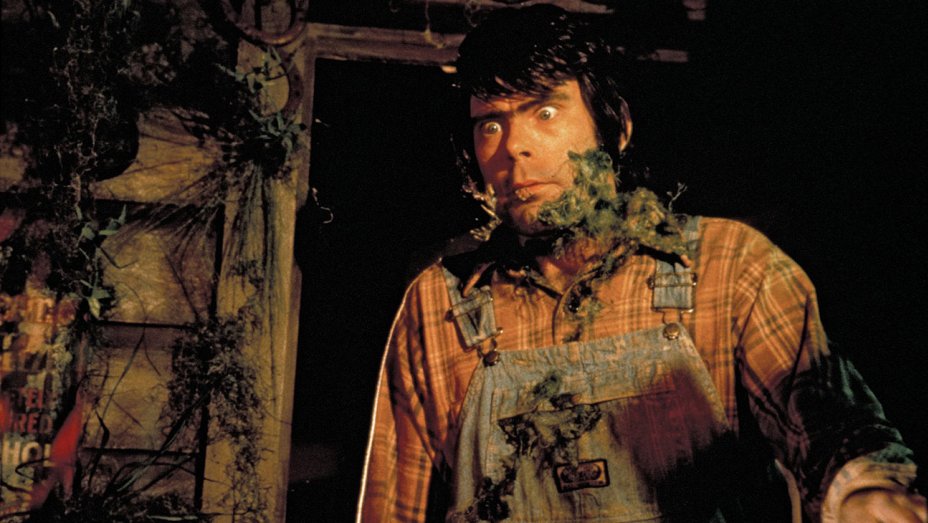 Masters of the macabre (writer Stephen King and director George A. Romero) conjure up five shocking yarns, each a virtuoso exercise in the ghouls-and-gags style of classic 㤺s horror comics. A murdered man emerges from the grave for Father’s Day cake. A meteor’s ooze makes everything … grow. A professor selects his wife as a snack for a crated creature. A scheming husband plants two lovers up to their necks in terror. A malevolent millionaire with an insect phobia becomes the prey of a cockroach army. Add the spirited performances of an excellent cast (Hal Holbrook, Adrienne Barbeau, Leslie Nielsen, Ted Danson, E.G. Marshall and King himself) and the ghoulish makeup wizardry of Tom Savini, and you have a non-stop, thrilling ride that “plays like an anthology of human phobias”, (Roger Ebert)! 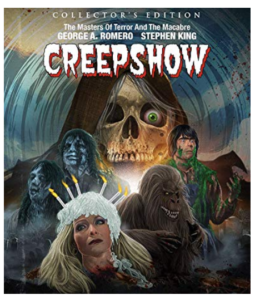 A horror anthology brought together by two of the most renowned minds in horror, Stephen King and George A. Romero. The first of five stories is the super cheesy “Father’s Day”, a great way to kick off the series of spook stories. Next was Something To Tide You Over, which in my opinion has the best writing and dialogue of the bunch. We also see E.G. Marshall and Stephen King star as the lone character in their respective stories, which is about a fast invasive space plant species’ and an apartment being overrun by cockroaches that symbolize the cities minority community. The most notable segment is the fan favorite called The Crate led by Hal Holbrook, the lovely Adrienne Barbeau and a wicked, little man-eating arctic monster. The movie as a whole keeps the viewer interested since the stories are so short and the dark comedy is persistently good. If I were to rank the stories it would go Something To Tide You Over, The Crate, Father’s Day, The Lonesome Death of Jody Verrill, They’re Creeping Up On You.
Movie Content: 9/10

The print is presented in 1080p/AVC MPEG-4 with a 1.85:1 aspect ratio. Shout Factory does another superb job here with the film transition to high definition. The print is not fully free from artifacts or dirt specs that plagued all previous releases on DVD, but Shout has been doing an excellent job with each single transfer from older releases. Colors hold up rather well with expansive amount of colors used in the film. There are some parts where the colors do appear soft. Originally “Creepshow” was filmed in 1.33:1 and expanded to 1.85:1 to film the frame. I didn’t notice any severe framing issues
Video Quality: 9/10

The audio mix is presented in DTS-HD 5.1 and a DTS-HD 2.0 Master Audio lossless tracks. ‘Creepshow’ is not going to really impress you in terms of having a sound design that fills the entire soundfield. There are some sound effects here and there that make their way into the soundfield, but not as much as I would of hoped. Dialogue is handled very well with a nice dynamic range with no issues.
Audio Quality: 8/10

“Creepshow” is one of the best in the short story horror realm right up there with “Body Bags” and “Tales from the Darkside”. The stories here happened to be very original outside of the serial killer installment. It was a very nice blend of horror, sci-fi, and some elements of comedy that should please most viewers. Being it was from the 80’s just gave it that extra element of charm we always seek.
Overall Rating: 9/10