In a career filled with unforced, naturalistic performances, Jeff Bridges gives one of his finest in Crazy Heart. His oft-married, booze-soaked troubadour Bad Blake has just rolled into Santa Fe when he meets Maggie Gyllenhaal’s journalist Jean. “Where do all the songs come from?” she asks during their initial encounter. “Life, unfortunately,” he sighs. Against Jean’s better judgment, her fling with Blake blooms into a full-fledged relationship. Between gigs, Blake hangs out with the divorcée and her 4-year-old son, with whom he establishes an instant rapport, possibly because the musician is just an overgrown kid himself (and also because he hasn’t seen his own boy in years). While Blake plays juke joints, his protégé, Tommy Sweet (Colin Farrell, cast against type to fine effect), plays stadiums, but just when director Scott Cooper’s debut seems to be going down the same path as A Star Is Born, Sweet offers his mentor an opportunity that could revive his reputation–at the expense of his still-healthy ego. Between Jean and Tommy, things start looking up for Blake until a critical error puts his stab at redemption in jeopardy. Once Robert Duvall enters the scene as Blake’s favorite bartender, it’s clear that Cooper has Tender Mercies in his sights, but Crazy Heart, which features music by T-Bone Burnett and rough-hewn singing by its Golden Globe-winning star, plays more like a sincere cover version than a strikingly original composition. Still, like Duvall’s in Tender Mercies, Bridges’s performance is Oscar-worthy. 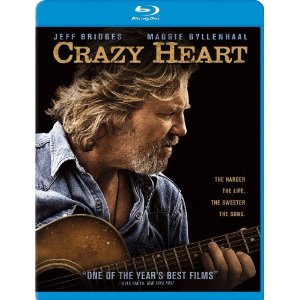 Jeff Bridges plays Bad Blake a Country Western star on the far end of his career. He was once a star with hit songs, albums people would buy and stadiums he could fill. Now he drags himself across the southwest in a car that could breakdown at any minute, playing whatever small gigs his agent can find with pick-up bands he fears are getting paid more than he is. He drinks so much he sweats whiskey. At one of his shows, small town reporter Jean Craddock (Maggie Gylenhaal) interviews him, and over a couple glasses of whiskey he falls for her. Despite her previous bad experiences with men she takes a chance on Bad. And for a while Bad vicariously experiences the family life he missed with his wife and child.

The relationship with Jean, which at first seems like the classic older leading man mismatch with the younger woman that wouldn’t necessarily happen in real life. But Gylenhaal plays Jean that is desperate in her own way. She may not be at the end of her road like Bad is, but she definitely feels like she’s backed into a corner, and the relationship between the two feels real.

Crazy Heart is as gently paced as a Country Western song. Colin Farrell appears in a nicely understated role as Tommy Sweet, a former protégé of Bad’s who has hit the big time and is trying to help his former mentor out. Unfortunately, Bad resents Tommy’s success and the opportunities he tries to steer Bad’s way. Robert Duvall plays the voice of wisdom in Bad’s life as his hometown bar owner. Bridges does his own singing in Crazy Heart and really works to the advantage of the character. Bridges’ untrained voice exemplifies Bad’s broken voice and broken life.
Movie Content: 9/10

The print is presented in 1080p/MPEG-4 with a 2.35:1 aspect ratio. The film is very colorful throughout. Colors are vibrant carrying a more natural color palette. Blacks are also very strong and deep. With strong colors and deep blacks, it brings out the fine details. Details are very good. Fleshtones also look very natural. The print is as clean as a whistle with a very pristine look.
Video Quality: 9/10

The audio is presented in DTS-HD MA lossless 5.1 mix. Dialogue through the center channel is very clean and crisp. The music on this soundtrack is what mainly pushed the audio in the soundfield. It sounded like pure bliss to my ears. The rears do get some action when music would play or the use of any effects.
Audio Quality: 9/10

This is another movie that I don’t really have anything bad to say about. The acting is amazing, the music is transcendent, and while the movie could have easily succumbed to cliches it avoids them with ease. I think this is what all musical biopics should be about. If you like music biopics, character studies, good music, or simply movies with great acting I highly recommend this movie.
Overall Rating: 8.5/10