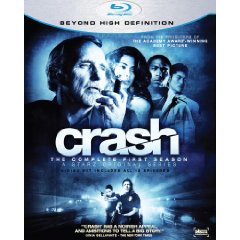 From the producers of the Academy Award®-winning Best Motion Picture of the same title, “Crash” takes an in-depth, up-close and deeply personal look at some of the lives slamming together in the melting post of Los Angeles. Led by film icon Dennis Hopper, it’s here where all ends of the social spectrum meet that collisions happen, shattering lives and creating new futures. Now, for the first time on DVD, the complete first season of this daring drama from Starz is available in this 4-disc set. Includes all 13 compelling episodes plus tons of bonus features!

In this city, it’s dangerous to have a dream but impossible not to follow one. And that constant pursuit of the unattainable will make the most unlikely characters connect and collide in a diverse social mosaic. From chance encounters to dramatic interactions, L.A. is the fuel that can change lives forever.

This all new season of “Crash” features a mix of individuals from very different sides of the city. Among the new cast members are Eric Roberts (The Dark Knight) as Seth, a billionaire entrepreneur; Linda Park as Maggie, Seth’s beautiful wife; Dana Ashbrook playing Jimmy, a charismatic gambler; and Jake McLaughlin (In the Valley of Elah) as Bo, a former pitching ace.

Returning cast members include Dennis Hopper (Hoosiers, “24”) as the newly-sober Ben Cendars; Jocko Sims as Anthony, Ben’s reluctant ally; Ross McCall as Kenny, a security guard looking for a second chance; and Moran Atias as Inez, now the hostess of an exclusive men’s club. This is a show that is not just dramatic, it’s dramatic. Eddie may be trying to leave that gang life behind, but damn it, they keep pulling him back in. Ben is not just eccentric, he may be truly dangerous – though it’s Dennis Hopper playing him, so that’s not a surprise.

From the opening episode, one thing becomes very clear with Crash, and that is that the people behind it want to create something interesting and ambitious. There is a lot of great potential here for stories, especially ones that tackle the uncomfortable but significant topics that was the meat and potatoes of the movie. The biggest problem is that the flaws of the movie become amplified here, as they are spread out over a thirteen episode story arc.

The Oscar-winning film was accused during the post-Oscar backlash of taking an overly-simplified view of racial relations. That may have a certain amount of validity, but the hyperlinked nature of the film only allowed a certain amount of focus on each story and the questions were intended to remain unanswered, even just suggested at a couple of times. Spread out over thirteen episodes that are nearly an hour long apiece, the time limitation does not come into play. However, the questions of race relations remain oversimplified and the television series seems willing to play it safe, rather than move into an area that might turn off certain viewers.
Movie Quality: 8/10

The print is presented in 1080p/AVC MPEG-4 with a 2.35:1 aspect ratio. The print looks very good throughout, yet there are a few inconsistencies. Colors are vibrant and carry pop which brings out the fine details. There are a few scenes lack focus, causing a loss of detail. There is a hint of grain in the print, but it is more apparent in the first darker scenes of the film. Blacks are deep in the darker scenes, yet the lighting could have been a bit better to make things more apparent. Overall, this is a good print for this hit television series.
Video Quality: 8.5/10

The audio is presented in Dolby Digital 5.1 mix. This is the one area where I am disappointed in that a lossless track was not used as we are in the high definition era. Dialogue through the center channel is very clean and crisp. The music on this soundtrack is what mainly pushed the audio in the soundfield. The rears would mainly get some action when music would play or the use of any effects.
Audio Quality: 7/10

While critics have panned this television series, I did enjoy it and with Dennis Hopper as a part of the cast it is even more enjoyable. There is just some kind of aura about Hopper that draws the viewer. On Blu-ray the video is good, but the audio is one area I was disappointed with. If you are a fan of the show this is recommended, and for first time viewers a rental would suffice.
Overall Rating: 8/10