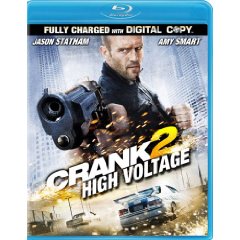 For relentlessly revenge-driven and eternally enraged hitman Chev Chelios (Jason Statham), not even death could slow him down. After being poisoned, beaten, shot, and falling several thousand feet onto unforgiving pavement, Chelios is alive and well, save for having his indestructible heart stolen by Chinese mobsters and replaced with a mechanical one. Now forced to re-energize his ticker with bursts of electricity at frequent intervals, the bitter killer must hunt down his assailants while simultaneously fending off nearly limitless enemies from his past. On his side is vitriolic girlfriend Eve (Amy Smart), maniacal ex-doctor Miles (Dwight Yoakum), spastic ally Venus (Efren Ramirez) and an unquenchable thirst for vengeance.

For those that did not see the first one i will warn you. this is not for someone that is looking for a deep plot with a thick story line and developing characters. the plot is Chev Chelios (statham) had his heart taken from his body by the chinese and replaced by a fake battery powerd heart. to keep himself alive he has to electroffy his body to charge the battery to keep his heart running or he will die. so Chelios has to fine his heart to get it put back in his body by killing everyone that took it from him. the plot does not get much better then that, but this is what makes this movie what it is. Crank was not made to have a deep plot it was made to be stait forward and fun.

The original ‘Crank’ was shameless, high octane fun, and so is ‘Crank 2: High Voltage,’ a film that doesn’t know the meaning of the word “excessive.” There’s not a trace of humility to be found in any one of its ninety-six minutes. It’s an unabashedly crude crime caper that uses four-letter dialogue as if being paid by the letter. It’s an in-your-face assault on the senses, a hyperactive video game that never makes use of the pause button. Normally, these would be the hallmarks of a God-awful film, but in this case, they’re the hallmarks of a stylish thrill ride that’s just as funny as it is shocking.
Movie Quality: 8/10

The print is presented in 1080p/AVC MPEG-4 with a 2.35:1 aspect ratio. The visual style used here comes off very well, but the dizzyness and fast pace of the camera can get a little bit annoying. Color management is excellent with the style that is being used in the film. Colors are bold, vibrant, and pop off the screen. Fleshtones are natural looking with some excellent details. If you want to show off a film that takes advantage of Blu-ray this is it considering that details are out of this world. Black levels are rather deep. ‘Crank 2’ is one detailed film due to strong color management and deep blacks. There are no blemishes on this print at all, it looks clean with a subtle use of grain throughout the film.
Video Quality: 10/10

The audio is presented in DTS-HD MA lossless 7.1 mix. This mix offers dynamic the sound effects and the soundtrack takes advantage of all the surrounds. From gun shots to action heavy sequences, you will feel like the action is taking place right in your living room. Bass management is also well done in this film. With the film split between action and dialogue, voices come through the center channel rather clean.
Audio Quality: 9/10

‘Crank 2’ is a whole different beast than the first film and it runs on high octane from start to finish. I enjoyed the first film a lot, but this one falls a notch for me due to the camera style which involved way too many quick shots from frame to frame. This is a mindless action romp that you will not be disappointed if you are sitting back looking to enjoy balls to the wall action. On Blu-ray this film offers demo worthy video and audio that you will not be disappointed by at all. I highly recommend a rental first as this film is different from the original and may turn off some, but if you are a fan this is worthy of a purchase.
Overall Rating: 9.5/10