Confessions of a Shopaholic Blu-ray Review 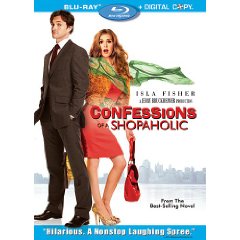 Fall in love with the adorable Becky Bloomwood (Isla Fisher) in the hilarious romantic comedy Confessions Of A Shopaholic. Becky is desperate for a job writing for a high-fashion magazine in glamorous New York. She gets her stilettos in the door writing a personal finance column at a sister publication. Much to her surprise, her column, The Girl In The Green Scarf, becomes a hit, and she falls head over high heels for her handsome, overworked boss (Hugh Dancy). But Becky has a secret that leads to some hilarious high jinks that could unravel it all. From the best-selling novel, and featuring the perfect comedic cast, it s the feel-good romantic comedy you ll fall in love with over and over.

Isla Fisher plays Rebecca Bloomwood, a NY ingenune in love with clothing that far exceeds her budget. Rebecca aspires to work at a top fashion magazine but gets hired at Smart Saver instead. She writes a clever magazine article that is a hit with the plebs, catapaulting her to saver saviour status. In the meantime, she falls in love with her cute boss and dodges debt collectors.

The plot of ‘Confessions of a Shopaholic’ is the exact opposite of The Devil Wears Prada. In Devil, Anne Hathaway wants a “serious” job but gets a makeover and a job at Vogue. In Confessions Rebecca wants the frivilous job but gets a makeunder and a job at Serious Saver. Both girls are run ragged trying to keep up with the lie they are living and eventually come to terms with their goals. In Devil, Anne is run out of her job by Meryl Streep. In Confessions, Rebecca is mentored and loved by Hugh Dancy.

‘Confessions of a Shopaholics’ attempts to recapture the great madcap comedies of 1940’s Hollywood. While the story lines may be fun in the Kinsella series from which the movie is based, the presentation of the film during the current financial squeeze doesn’t really work as well as it should.
Movie Content: 5/10

The print is presented in 1080p/AVC MPEG-4 with a 1.85:1 aspect ratio. olors are vivid throughout the presentation. Black levels aren’t as deep. Flesh tones are accurate and natural looking. Details are also excellent. The print is pristine from any issues.
Video Quality: 9/10

The audio is presented in DTS-HD MA lossless 5.1 mix. For a film of this nature, the audio is very engaging in the soundfield. The rears actually get a nice amount of usage with the soundtrack. Dialogue through the center channel is very clean and crisp. The mix is well balanced between the dialogue and soundfield.
Audio Quality: 8/10

The flawed heroine of “Confessions of a Shopaholic” is desperately trying to be that and succeeds to some extent thanks to the star Isla Fisher, but with no visible chemistry between her and Hugh Dancy, and the run-of-the-mill screenplay. On Blu-ray the film looks great and has splendid audio that will make fans of the film happy.
Overall Rating: 7/10