Posted in DVD Reviews by George Theofanopoulos on 20 March 2011

Colin Mochrie and Brad Sherwood, stars of the Emmy®-winning Whose Line Is It Anyway?, have finally recorded their hilarious live stage show!! These masters of improv comedy have performed their outrageous, one-of-a-kind show to sold out audiences all over the country. Colin and Brad’s TWO MAN GROUP is a riotously funny, interactive, and completely improvised tour de force. Using nothing but their lightning fast wits and some audience volunteers, Colin and Brad create pandemonium on the spot in one of the funniest live shows you will ever see. 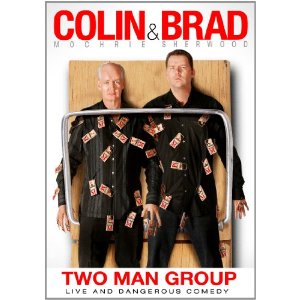 When WHO’S LINE IS IT ANYWAY? premiered on television I thought it was one of the best shows around. I’ve always loved improve comedy. It started when I saw SATURDAY NIGHT LIVE the first time only to learn that most of the cast began at Second City in Chicago. In college I got my first taste of Second City and fell in love with it, making it a point to visit each time I go there now.

But WHOSE LINE brought weekly improv to the small screen and made me laugh. Not once in a while but every single episode I watched. And while they had a number of talented individuals on the show, my favorite was Colin Mochrie. Mochrie was teased about his baldness and being Canadian each week but he dished back with a terrific sense of humor and comedic timing. So imagine my delight to hear that he was touring with Brad Sherwood across the county. While I didn’t get to their show, I can now enjoy watching them whenever I want with the release of COLIN MOCHRIE & BRAD SHERWOOD: TWO MAN GROUP.

This is a taped concert film basically of the dynamic duo of quick wits displaying their comic talents. The pieces they do are not scripted and haven’t been set up in advance. They’re doing improv where they come out, take a few suggestions such as an event and then apply the event to different improv games that have been used for years.

They begin with a game that features the two of them unable to move without the assistance of a couple they bring up from the audience. Each movement they make is done by these two ordinary people moving their various body parts which often leads to both embarrassing and funny pieces.

They do a sequence called sideways sketch where they take a suggestion from the audience of a situation (in this case a man upset with his neighbor because his dog poops in his yard) and make comedy of it. The thing is that they’re actually lying on the floor with a prop stage featuring a camera overhead making it look like by rolling across the floor they’re moving across the set.

There are a number of other items they perform here, ending with what Sherwood describes as the most dangerous piece to perform. The stage is set with 225 every day mousetraps placed several inches apart. Brad and Colin then remove their shoes and socks and place blindfolds on. When Colin suggests that this isn’t really dangerous, another 25 mousetraps hanging by threads are lowered, some about chest level, others nearer definitely sensitive areas. They then do an alphabet game where they perform a suggested event (a man upset that his next door neighbor takes his mail) in operatic format, each using the next letter of the alphabet to start their line. The ensuing snapping of the traps and gags is the result.

This show was quite enjoyable and funny, making me laugh so hard a few times that I had to back up or pause the disc. Then again I’ve always found these two men to be two of the funniest guys on the planet, even more so when doing improv.

Their shows are interactive and completely improvised. No two are ever the same. This involves amazingly quick minds, a lightning-fast sense of humor, and sheer courage. Using only their quick wit and a few audience volunteers, Mochrie and Sherwood create original, hilarious scenes.
Overall Rating: 9/10