Cloudy With A Chance of Meatballs Blu-ray Review 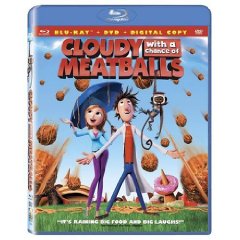 Judi and Ron Barrett’s Cloudy with a Chance of Meatballs is a much-loved, whimsical book about a tiny island where food falls from the sky like rain. The book serves as a jumping-off point for Sony’s animated, digital 3-D Cloudy with a Chance of Meatballs which is not so much a retelling of the book as an exploration of what makes food rain from the sky on a small island in the middle of the Atlantic Ocean. Flint (Bill Hader), a clever young inventor with a reputation for creations gone awry, has recently completed a machine that he claims will turn water into food. Like his past failed inventions, Flint’s new food-converting machine doesn’t work as planned, and on its initial test run it ends up getting launched into the sky where clouds form and begin to rain cheeseburgers. The falling burgers destroy the Swallow Falls community’s latest attempt to bolster its failing, sardine-dependent economy, but the Mayor’s (Bruce Campbell) initial fury quickly turns to greedy anticipation as he begins to realize that food falling from the sky could serve as an innovative tourist draw. As the entire town is caught up re-defining itself as “Chew and Swallow,” only Flint’s father (James Caan) remains skeptical of his son’s invention.

The central plot in “Meatballs” revolves around this struggle for Flint to make a scientific invention that works, in which failed attempts include creatures such as “ratbirds” and “spray on shoes”, and gain acceptance from his father and from the town. He is working on an invention (for comedy purposes, I will not disclose the name of said invention) that will, he hopes, turn water in to food. This also coincides with the reopening of the town he lives (Swallow Falls) in, instituted by the Mayor Shelbourne (which is brilliantly voiced by Bruce Camopbell) to help bolster the failing economy, both the fate of the town and Flint collide at the reopening ceremony and kicks the film in to fast-paced odd-ball humor gear.

What made this movie so fresh, and yet so simultaneously jarring was the film’s unabashed silly sense of humor that plays very well of society’s cliches and roles that we accept for ourselves due to peer pressure and expectations. A lot of the humor will go over the heads of children, when I saw it, out of a theater that was about 1/4 full, I was the only one laughing for the first 30mins until other adults (with children) realized it was a-okay to laugh. There are definitely parts of the movie that will appeal to children, such as the idea of rain that is food, ice cram snow, and a good dose of slap-stick humor, but all of this is rounded out extremely well with a an awareness of its source material and the choice to flesh out the story.

The dynamics of the relationship between Flint and his father are just great, and certainly ring true for me and a lot of friends I know as well (not the dead mother part), but its nice to see a relationship like this handled sensitively and what I was expecting to be a mind-numbingly stupid movie. The dynamics between Sam and Flint is fun as well and while treading cliches actually makes what could have been a boring romantic side-story is actually fun and fresh.
Movie Quality: 9.5/10

The print is presented in 1080p/AVC MPEG-4 with a 2.35:1 aspect ratio. This has to be one of the most vivid and colorful animations on Blu-ray from Sony Pictures. Due to the colors popping off of the screen, it brings out the details in the animation. Certain colors like red’s, blue’s, and green’s stick out in this presentation. Some good examples of fine details, look at the textures in the food as it drops from the sky.  Good job Sony as this is one of your first animations to look considerably great on Blu-ray.
Video Quality: 9.5/10

The audio is presented in DTS-HD  MA lossless 5.1 mix. This mix takes advantage of the soundfield in this film. The soundtrack and sound effects can be heard coming from all around as this is one dynamic audio experience. At times animations tend to be more dialogue driven with lack of atmosphere. Dialogue is clean and center with no balance issues..
Audio Quality: 9/10

‘Cloudy With A Chance of Meatballs’ is Sony Pictures first animated film that is top notch in terms of story, video, and audio presentation all around. Having seen countless of animations over the years, Sony finally gets it down right with ‘Cloudy’. Special Features are not lacking either which are all presented in high definition. I never read the story in school, but this animated film was great from start to finish.
Overall Rating: 9/10