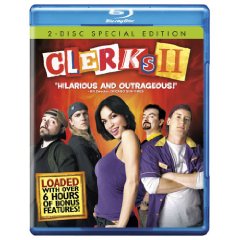 When the original ‘Clerks’ was released on VHS I was working at a small “mom & pop” video store. I remember watching the film for the first time and thinking to myself that some of the stuff that Dante and Randal are doing in this film, I was doing at the same time working at the video store. Kevin Smith returns with his sixth film and sequel to the film that put him on the map, ‘Clerks II’. This isn’t a lazy attempt for Smith to make a sequel to grab the cash and run. ‘Clerks II’ is actually hilarious and in many ways trumps the original. Smith took what he has learned from his successes and failures from the first five films to come up with a clever sequel. Working with a low budget of $5 million dollars, the film had a total worldwide gross of $25 million dollars.

The film opens up outside the Quick Stop in glorious black and white. Fans of the original ‘Clerks’ will remember that this is where (Brian O’Halloran) and Randal (Jeff Anderson) have spent the last ten years of their life making a living. Randal forgot to shutoff the coffee pot the night before, so the Quick Stop bursts into flames as we move from B&W to color. Nearly a year later after the events of Quick Stop burning down, we move to local burger joint called Mooby’s where both Dante and Randal work at. Dante is finally determined to make something better of his life than the last ten years.

What will surprise many is that Dante is engaged to be married and that he is going to be moving with Emma to Florida. Dante will have everything setup for him in Florida, a home, job, and everything that he can desire. The problem here is that all these freebies in life come with a price. Emma is a control freak that wears the pants in the relationship. Dante becomes the laughing stock to Randal and his boss Becky (Rosario Dawson) whom he has feelings for. They know that Emma is not the right girl for him, but he will never admit it.

Randal wants to make sure he sends Dante off in style with the help of fellow co-worker, Jesus freak Elias (Trevor Fehrman), Jay (Jason Mewes), and Silent Bob (Kevin Smith). Randal wants to give his friend something so much more messed up than they both have ever seen during their friendship.

I found ‘Clerks II’ to be hilarious and it takes things up a notch from the original. Kevin Smith does an excellent job with this film bringing comedy and emotional elements together for a very funny film. I had a lot of fun with this film, even though a lot of critics at the time were upset that Kevin Smith was making a sequel to a film that probably did not need one. The original ‘Clerk’ was created on a shoestring budget and would become one of those films that would shape many comedies in the 90’s.
Movie Content: 4/5 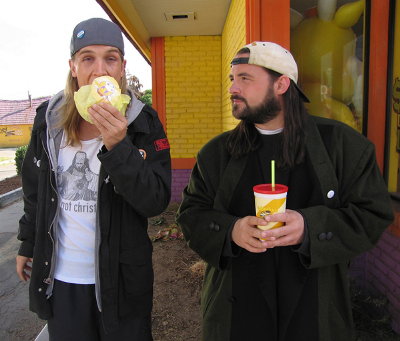 The print is presented in 1080p/AVC MPEG-4 codec with a 1.78:1 aspect ratio. This film is not going to be one that will knock your socks off visually. A lot of that has to do with Smith’s decision to film ‘Clerks II’ with this particular tone. The grain is subtle throughout, yet is intended as a part of the presentation. Colors are washed out with purple and yellow being the strongest colors out of the entire pallete. Blacks are deep throughout the presentation. Details are rather good, yet they aren’t eye popping. The transfer is pristine from any issues like artifacts or damage.
Print Quality: 4/5

The audio is presented in Dolby TrueHD 5.1 mix. The mix is not going to take full advantage of the TrueHD due to this being more of a dialogue driven film. Like all Kevin Smith films, conversation takes center stage in all his films. Dialogue is very clean and clear providing excellent depth. The soundtrack is where the film takes full advantage of the soundfield providing a nice amount of dynamics.
Audio Quality: 4/5

If you are a fan of the original ‘Clerks’, you will not want to miss out on this sequel on Blu-ray. All of the features from the 2-Disc HD DVD release have been ported over providing over 6 hours worth of bonus material. I highly recommend this film for those looking for a very smart comedy.
Overall Rating: 4/5