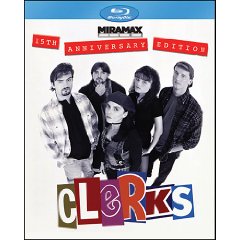 Before Kevin Smith became a Hollywood darling with Chasing Amy, a film he wrote and directed, he made this $27,000 comedy about real-life experiences working for chump change at a New Jersey convenience store. A rude, foul-mouthed collection of anecdotes about the responsibilities that go with being on the wrong side of the till, the film is also a relationship story that takes some hilarious turns once the lovers start revealing their sexual histories to one another. In the best tradition of first-time, ultra-low budget independent films, Smith uses Clerks as an audition piece, demonstrating that he not only can handle two-character comedy but also has an eye for action–as proven in a smoothly handled rooftop hockey scene. Smith himself appears as a silent figure who hangs out on the fringes of the store’s property.

Clerks came out during an early 90’s time-period when culture was taking a step sideways instead of forward. A generation brought up with 80’s hair metal, Eddie Murphy movies and The Cosby Show wanted something different. Instead of moving forward, our culture wanted smarter versions of the established entertainment, music fans embraced Nirvana and Pearl Jam, television watchers tuned into Seinfeld and film embraced new visions from the likes of Quentin Tarantino. Enter Kevin Smith into this time with his no budget masterpiece that probably wouldn’t have been seen if it were made five years later.

What made Clerks stand out was its revelation that a great script is all you need to make a great movie. You didn’t enjoy Clerks because of its A- list actors, big budget action sequences or filmmaking tricks that director’s greatly over hype; you liked Clerks because it was funny and relatable. Smith’s writing captured the everyday feel of his early 20’s life as his main characters Dante and Randal’s shift at the Quick Stop and RST Video becomes an unexpectedly crazy journey. Dante’s struggle with his inability to resolve the issues in his life is what lies at the heart of every great Kevin Smith film. Right up to Clerks II he is a master at writing a realistic interpretation of male insecurity. Dante and Randal both remain believable male characters even while revealing feelings that many males may never actually talk about. Randal becomes the voice of the audience watching the shenanigans of Dante’s life unfold trying to make Dante realize his life is ultimately up to him, while cracking the comments and flipping the bird to his work commitments that both the audience and Dante envy.

No matter how many times I watch Clerks, it is just as funny and good as it was the first time. The movie is fun and foul-mouthed, but I wouldn’t have it any other way. It shows that life isn’t always an easy street, but it is full of struggle. No one has learned this in one day more than Dante Hicks, a store clerk who isn’t even supposed to work today, and who doesn’t let his buddy Randal or the audience forget it.
Movie Quality: 9.5/10

The print is presented in 1080p/AVC MPEG-4 with a 1.85:1 aspect ratio. Considering that this film was made on a shoe string budget of $12,000 do not expect to see the best presentation of a film like this in high definition. I have seen both versions of the DVD countless of times over the years. This is the best the film has ever looked for home video as any artifacts but there is still print damage that rears its ugly head. Grain is still prevalent throughout the print and is as heavy as I remember the last I saw the film. Black levels are nice and strong along with white levels holding up very well. While this print is not a huge upgrade over the DVD, I would only recommend upgrading if you are a huge fan.
Video Quality: 7/10

The audio is presented in DTS-HD MA lossless 5.1 mix. ‘Clerks’ is a dialogue heavy film with a nice soundtrack thrown in the mix. Do not go in expecting an aural experience upgrade with this DTS-HD MA track over the previous DVD Dolby Digital 5.1 mix. This is a more front heavy experience all the way through except when the soundtrack comes into play with the rock/metal songs which can be heard pouring into the soundfield from the rears. Again, this is not an earth shattering audio presentation, but if you are a fan that has owned this film on VHS, DVD, or any other form of media this is a definite upgrade.
Audio Quality: 6.5/10

‘Clerks’ finally arrives on Blu-ray with some mixed results. A few of the issues I can overlook due to the age and the way ‘Clerks’ was filmed on a $16,000 budget. If I have one issue with this release, I just wish that the audio mix was a bit more consistent and was given a little bit more care. All the extras from the 10th Anniversary DVD release are included here which was awesome of Disney to give the fans everything available.
Overall Rating: 7.5/10