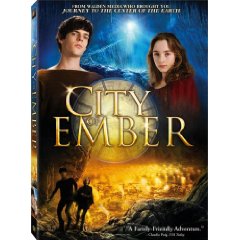 In one of the darker films geared towards the teenage audience, ‘City of Ember’ has a lot of political and social commentary undertones. A lot of that comes from the Novel by Walden that the film is based on. It is one of those artistic films that will pull you into its atmosphere very easily just because of the look and feel of the film. I think that this will be one of those films that will be a cult favorite over time as it has many cult like elements written all over it.

The story in ‘City of Ember’ tells the tale of a city that is built beneath the Earth. Underneath this city lives the remainder of the human race as at one time there was an Apocalypse on mother earth. Ember is a massive city underground that I was quite astonished by its size. Director Gil Kenan can take such a simple concept and take it to epic proportions as we see here.

Mayor Cole (Bill Murray) is the leader in this post-apocalyptic world called Ember. Cole assigns jobs in Ember to the younger kids. There is a problem as they near 200 years underground, resources such as food are beginning to deplete. With no food, the remaining villagers can’t survive in this world. Even worse, the power generators are beginning to become a problem as the power goes out from time to time. All of Ember is in huge trouble if the citizens do not figure out their next move.

Two teenagers Doon Harrow (Harry Treadaway) and Lina Mayfleet (Saoirse Ronan) become our heroes as they set out to save Ember from a total meltdown. Both work together to save Ember and it is their energetic performances help pull the film along. I don’t know if this could have worked with any other two teens in these roles. Now I did feel that Bill Murray just didn’t fit his role right as the Mayor. There was just something off about him in this role and I can’t place my finger on it. 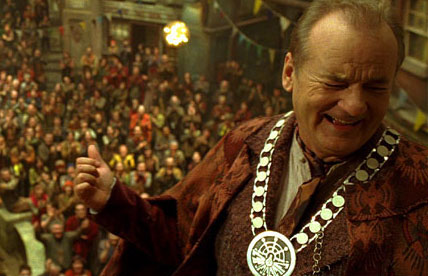 ‘City of Ember’ has such a astonishing looking world that takes after artistic dystopian films like ‘Labrynth’, ‘Bridge to Terabithia’, and ‘City of Lost Children’. From a visual standpoint, the stylistic approach that Gil Kenan strives for is pure bliss. I can only imagine how this film would have looked on Blu-ray in high definition.

There are no special features, which is mind boggling for such a good film. Shame on you FOX.

‘City of Ember’ is a good film that has cult classic written all over it. FOX may have underestimated this film even though it didn’t do so well in the theaters, I see this doing well on DVD. The lack of features is a real disappointment. I highly recommend this film as it is very enjoyable.
Overall Score: 4/5