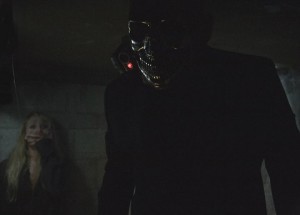 The game of cat-and-mouse is on as Chromeskull’s assistant, Preston (Brian Austin Green, Desperate Housewives), scrambles to tie up the loose ends left behind after his deranged boss’s last killing spree. He finds that he likes taking care of business—maybe a little too much. One bloody mess leads to another and the bodies pile up in a visual feast of the most spectacular kills ever filmed. Thomas Dekker (A Nightmare on Elm Street), Danielle Harris (Hatchet II), and Owain Yeoman (The Mentalist), also star in the most brutal slasher film of the year. Chromeskull is back with a vengeance! 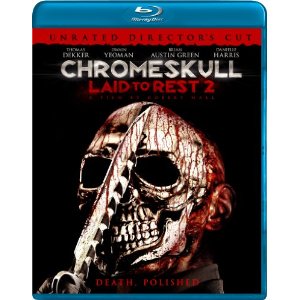 I had the highest of hopes for this sequel seeing as I loved the first installment. Chromeskull ‘Laid To Rest 2’ was confusing and muddled and completely wasted the talents of Danielle Harris by casting her in a role that was unnecessary and coma like in dialogue and acting. Of course then we have the bright spot in the movie and that is the gore ,it was done really well, not as well as the first but pretty close although it was abundant.

Also actress ‘Brianne Davis’ was great in her role as a nearly blind girl and ‘damsel in distress’ and she was another bright spot. Brian Austin Green was in my opinion another disappointment.His acting was lackluster and his performance added nothing to the film,an unknown with good acting skills would have served better. The last 30 minutes because it picked up and got me interested in it. Before that I was just going through the motions of watching and hoping it would get better or make more sense.
Movie Quality: 5/10

The print is presented in 1080p/AVC MPEG-4 with a 2:39:1 aspect ratio. ‘ChromeSkull’ is one of those films that uses the handheld camera approach throughout the film. When you are using a mixed video production, there are parts of the film that looks very low res. The image looks very detailed throughout. Colors are on the softer side in some parts of the film.
Print Quality: 8/10

The audio is presented in a DTS-HD MA l0ssless 5.1 mix. The soundfield is immersive at all times no matter if it is the special effects or dialogue. I was literally amazed with the amount of bullets panning from each speaker in the rears. Dialogue is also well placed in the center channel sounding crisp and clear. The best part of this all around aggressive soundtrack is that it is well balanced between the dialogue and sound effects.
Print Quality: 9/10

The film didn’t really live up to my expectations, yet still i really had a fun time with this one. It could have been better overall considering the original was much better.
Overall Rating: 5/10