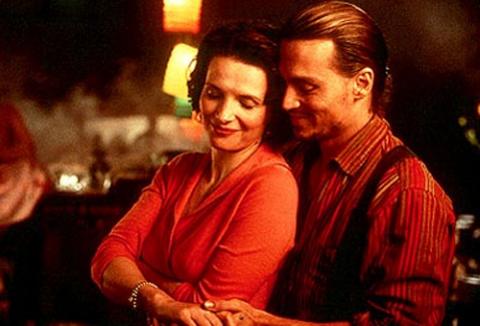 Juliette Binoche and Johnny Depp star in the “delicious” (Good Morning America) romantic comedy that swept audiences off their feet and earned 5 Oscar® nominations including Best Picture. When Vianne (Binoche) arrives into a sleepy, old-fashioned French village and opens a chocolate shop, she sends the townspeople into a flutter with her uniquely gifted treats. Before long the straitlaced villagers find themselves abandoning their reservations and succumbing to their deepest desires! But when the handsome stranger Roux (Depp) breezes into town, Vianne discovers that she too is susceptible to the charms of love in this sweet confection from the director of The Cider House Rules. 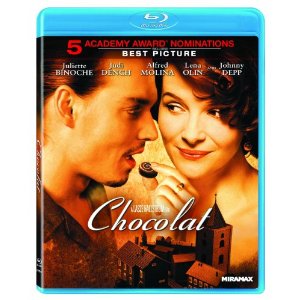 This is a poetic, visually stunning movie with quite a number of really good feamle roles, fine performed. There is so much poetry and magic, the movie reminded me of Latin American literature very much. The same sense of marriage of the real and the unreal, coexisting in harmony.

A young women, (who is also a single mother),a daugther of an European man and a Mexican curandera, arrives in a small traditional town in France, during the time of Lent . Not only she dares to open a chocolate shop during this time, but in additon her creations are considered kind of excentric, the same as the decor incorporating artifacts showing clearly Precolumbian heritage.The chocolate store owner breaks routines people had so far, and she is also able to help people hwo have psychological problems, healig human relations. But her otherness is not welcomed at first, people are distrustful, and she is a percived threat to their traditional ways.But they slowly warm up to her.

But there is a problem: the local aristocrat, a count who enjoys to infulence the life in the town, is hostile toward the newcomer, and has a very strong influence on the local Catholic priest.The count is anaware how bad his plotting is, until one day he is faced witt the results.A sad story about a strong, dominant persoanlity and weak, gulible folowing.But in this conflict, clash of two cultures, one traditional and one alternative, and the opposition bewteen the creative and the routine, it is the other, the revolutionary is the side which will be victorius. The count is hostile, she just lives her live according to her conscience.And we sympathise with her right away.

This movie is touching deeper societal problems, yet is very entertaining. The main focus is xenophobia, but also the appreacaiton of learnig across the cultures, and the need of positve influeneces of variosu kinds: will be this another culture, or just a different personality, or different kind of thinking.This movie, becasue is so poetic, (but maintains the integrtity of the story), is an ode to an opend mind.A movie a to enjoy and savour, a bitter-sweet one.And Juliette Binoche is wonderful as always.
Movie Quality: 9/10

The print is presented in 1080p/AVC MPEG-4 with a 2:40:1 aspect ratio. Colors look decent but rather soft throughout. Black levels are also fine, yet do not stand out. Flesh tones are accurate and natural. I did notice some print issues throughout the film, but they weren’t anything that became overly distracting. There is some subtle grain throughout helping fit in with the film’s overall feel and tone.
Print Quality: 9/10

The audio is presented in a DTS-HD MA l0ssless 5.1 mix. ‘Chocolat’ is a more dialogue driven film with decent audio for the premise of the film. Dialogue is very clean and crisp through the center channel. We have more of a front heavy experience with the mix as dialogue also tends to pan between the front speakers. When the rears are in use, you hear a few sound effects and the score.
Print Quality: 9/10

Chocolat is a very interesting and different movie. The scenery is very pretty and the town where it is filmed is novel. It is kind of like an old fairy tale which fans will not be disappointed.
Overall Rating: 8/10