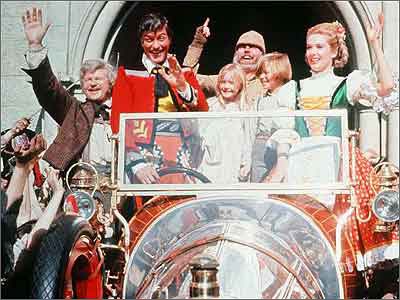 Ladies and gentlemen, boys and girls start your engines. You’re about to take an incredible ride with one of the most wonderful family films of all time! Now celebrating its 30th anniversary, Chitty Chitty Bang Bang has never looked or sounded better. Dick Van Dyke stars as eccentric inventor Caractacus Potts, who creates an extraordinary car called Chitty Chitty Bang Bang. It not only drives but also flies and floats as it leads him, his two children and his beautiful lady friend, Truly Scrumptious (Sally Ann Howes), into a magical world of pirates, castles and endless adventure. 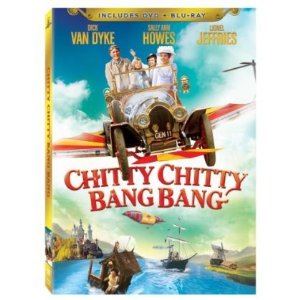 Before watching this movie again recently, I could only remember that there was a flying car, a nice title song, and something about children being kidnapped. Watching it again for the first time, I discovered that I had forgotten most of the movie.

Caractacus Potts (Dick Van Dyke) is an inventor way ahead of his time, whose inventions don’t always work the way they are intended. If you think his name is weird, the female lead is Truly Scrumptious (Sally Ann Howes), the daughter of a rich sweet manufacturer. This unlikely pair, along with his two kids and the wonderful car, Chitty Chitty Bang Bang, are the star players in a story which starts out being about pirates, and ends up as a rescue mission. With comic support from Caractacus’ father, and a toy maker (Benny Hill, in an uncharacteristic G rated performance), they defeat the schemes of spies (kind of like Laurel and Hardy combined with Boris and Natasha), an evil Baron and Baroness,and a wicked childcatcher, to bring the story within a story to a predictable but entertaining end.

The scenery is breathtaking, especially the Vulgarian castle and surroundings, and since this is a 1968 movie, we can forgive the lack of finesse in the special effects, where the characters stick out like sore thumbs from the backgrounds, and wires can be seen attached to Professor Potts during a dance sequence.

It’s a little harder to swallow the concept of Truly Scrumptious running around on the beach dressed in tons of white cloth and coming up spotless, and her song about needing a lovely man is way too over the top and much too long. I will admit to skipping over that one.

The sing along feature is a nice touch, and catchy songs (other than the theme song) include “Me Old Bamboo”, “Toot Sweet”, my personal favorite “P O S H (Posh)”, and the nearly too sugary “Truly Scrumptious”.
Movie Content: 7/10

The print is presented in 1080p/VC-1 with a 2.35:1 aspect ratio. Colors are visually appealing providing an eye catching image for a 40+ year old film.  There are times throughout the transfer where the image does have a softness. Fleshtones look natural except for a few scenes with the makeup use in this era jump out in high definition. Black levels have a nice depth. All this comes together for some very nice details that caught me off guard. The print has been cleaned up with the use of the dreaded DNR. Albeit a few minor issues, this is a nice looking print for a film of this age.
Video Quality: 9/10

The audio mix is presented in DTS HD 5.1 Master Audio lossless track. I was quite impressed with the depth of the dialogue coming through the center channel. Dialogue was clean and clear with no apparent issues. This is more of a front heavy experience with minimal usage of the rears until a few sound effects come pouring through. They are very minimal at best. The soundtrack fills the  soundfield rather well and much more than I had expected, but could have still been better positioned.
Audio Quality: 8.5/10

This is one of the last big budget fantasy musicals before these films became just too expensive to produce. But Dick Van Dyke was at his zenith here and Sally Ann Howes was marvelous as well. Note that Ian Fleming wrote the original story and as a tribute there were two Bond actors in the cast.
Overall Rating: 7/10